Brilliant performances from boys and girls cricket this term

News > Brilliant performances from boys and girls cricket this term

Despite the atrocious weather, we have managed to get some cricket in this season with lots of good games and individual performances. We hope the weather clears up over half term and the final 4 weeks allow for plenty of action on the fields with spectators in attendance. The uptake of cricket has been wonderful to see with both boys and girls happy to be involved in all fixtures.

The 1st XI have played 10 games and won 6. Highlights have included Archie Jones scoring 122 vs the XL Club, Sakhu Ndlela and Muzi Ndlela scoring over 200 runs this season, Joe Nash and Harry Seagon both taking 5 wickets vs The XL Club and Norwich School respectively. We have travelled long distances and will continue to do so after half term where we have the likes of Framlingham Ipswich, Stowe and Oakham to play.

The 2nd XI have had a frustrating half term with so many organised matches being cancelled due to the unseasonal poor weather. The two matches that have gone ahead saw the 2nds take on two first teams of Culford and Wymondham. The first match was a disappointing loss by 50 runs, a match that could have been won if catches had been held in the field. Josh Anthony scored a blustery 30 and Louis Bragg bowled extremely well for 2 wickets but was not backed up well by his fielders. The second game against Wymondham’s 1st team was a different affair, with some younger members of the squad being introduced. The game was over very quickly as Wymondham, who were clearly very keen for the game, could only manage 60 all out. Gresham’s managed to knock these off in 7 overs for the loss of two wickets. With Archie Sprott (27) and Harry Todd (17) smashing the ball all over the poorly cut outfield it was a very professional win. Archie Jones, a part time off spinner, managed to get 4 for 5 off his two overs.

Girls’ cricket has had a fantastic season so far: starting off with 10 players training in the first week, we now have 24 players who have played in 5 matches with a record of 3 wins against Norwich and Langley, 1 tie against Norwich, and 1 loss that came in the first game of the season against an experienced Culford side with multiple county players. There has been incredible development in the ability of the players, thanks to their hard work and coaching from the Norfolk women’s team coach and a dedicated team of staff coaches who have enjoyed the enthusiasm and commitment of the girls. The Captains, Poppy Goode and Poppy Gaunt and the unbeaten Esther Payne have done a brilliant job of leading the girls. We have seen outstanding performances with both bat and ball – Maddison Haworth-McKenna took a 6-for against Langley, while Poppy Gaunt hit 32 against Norwich. The Girls’ U14 and U15 sides of 2021 are laying the foundations for the future of girls’ cricket and are doing a fantastic job.

Despite the poor weather, the U15A team have competed in and won 3 games so far this term. The first was away at Norwich school where we restricted the opposition to 77 for 6 off 20 overs. Quick runs from Arthur Wilcox, Ed Jay and Campbell Tillcock meant that we reached the Norwich total with 9 overs to spare. The second game of the season was at home to Haileybury. Having lost the toss and been asked to bat, Arthur Wilcox and Elliot Hart combined with some brutal hitting, going at 10.5 per over for the first 10. Elliot was dismissed for 76 in the 13th over and Arthur carried his bat to the end of the innings scoring 98. Having set the visitors 199 to win, they never really got going and struggled to 109 for 5 from their 20 overs.

The most recent game was against Langley School.  With Arthur and Elliot selected to play for the 1st XI, it was a good opportunity for the other members of the team to step up. Langley won the toss and elected to bat and they lost regular wickets throughout their innings and were eventually bowled out for 98. Ed Jay and Campbell Tillcock opened the batting for Gresham’s with Campbell getting out 2nd ball. Ed Jay then carried his bat and smashed his way to 69 from 31 balls, launching an enormous 6 into the woods to win the game.

The U15B team have worked hard so far this term. With a big squad, selection is always a tough one. Out of the 4 games we’ve had scheduled so far, we’ve only been able to play one due to the weather getting the better of us. Every team sheet has been different as everyone is putting in the effort to get selected, a bit of a coaches dream but nightmare at the same time as we can only select 11 players. Our game against Norwich was our first run out and the team came away with a well-deserved win. Spike Cook had an excellent innings scoring 33 runs which was then followed up by some exceptional bowling from Monty Stocks, taking 3 wickets for 7 runs. There are still plenty of fixtures to go and hopefully we can continue to improve and build on our winning ways.

Somehow, we have managed to play 4 games although 2 of these were playing through the rain! With a large majority of the squad not playing any cricket for nearly two years due to the 2020 season being wiped out, it is quite a step up to U14 level and playing on longer pitches and using a full-size ball. The team is captained by Rory Richardson (F) who is in the Norfolk U14 County squad, and he has led the team very well so far and scored an excellent 68 retired, in the large win versus Langley last week. It was also pleasing to see Hector Lochore (W) score 52 retired in the same game. The team are keen and improving all the time and the bowlers are performing well. Charlotte Gaunt (O) has bowled very well as our opening bowler and she will no doubt play a vital role for Suffolk Girls U14s this year. Alex Morrissey (H) took 3 for 1 versus Langley, Harper Rand (F) bowled brilliantly v Haileybury, who were a phenomenally strong side, and took 2 for 18 off his 4 overs. Emerson Gilbertson (H) took 2 for 2 and Sam Green (T) 2 for 5 both v Langley. The team can look forward to the second half of term when hopefully the sun will shine, the runs will flow and the wickets of the opposition tumble!

The weather has permitted only 1 game so far this season for the 14B boys cricket team. We took on a strong Norwich team, on our Eccles pitch, and the reuslt unfortunately was never in doubt. We restricted them to 114 for 5 off their 20 overs, but gave away far too many extras – 48 runs = 24 wides or no balls. We fielded well but couldn’t match them for skill or technique in our batting and we came up 44 runs short. Robbie Fitzsimmons batted and kept well, the pick of the players in that match. 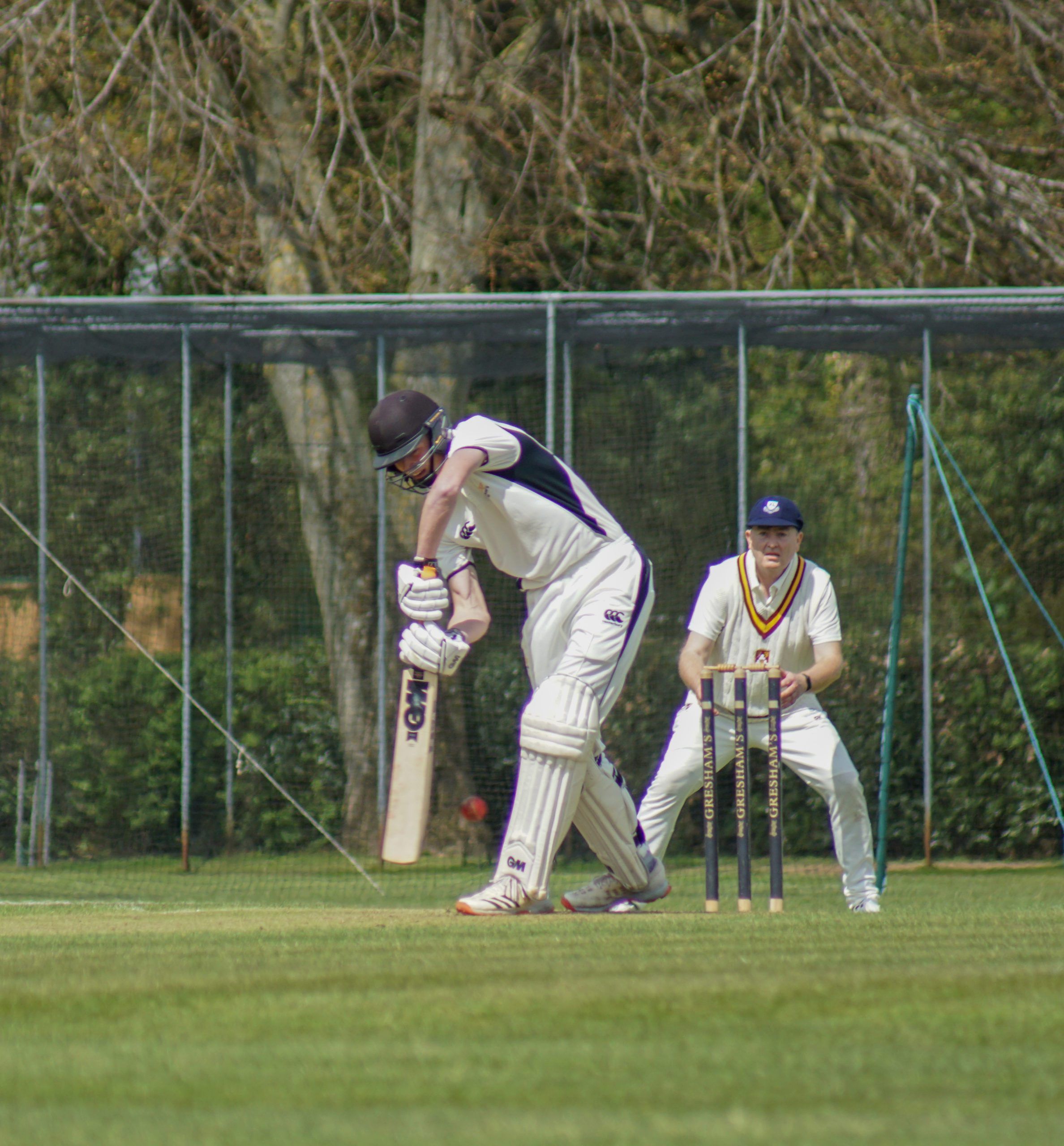