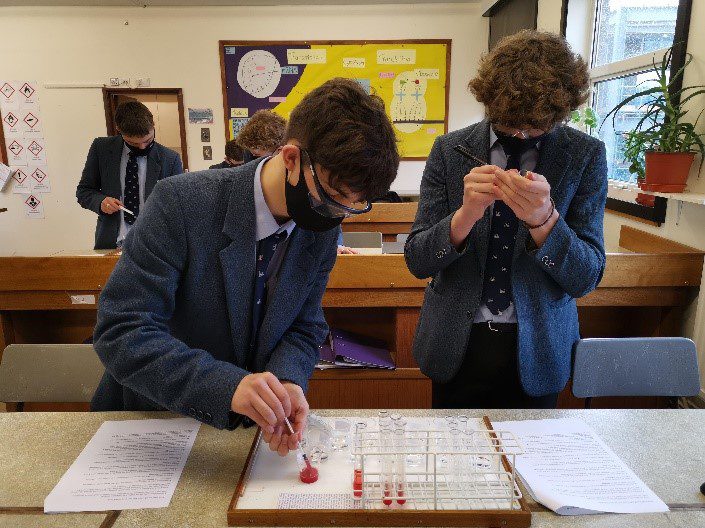 Monday 8th March marked the return to school for all pupils, but it was also British Science week. The Science department used the opportunity to celebrate this with some inspiring practical lessons with students.

In Biology, Year 9 investigated the growth of bacteria, looking at how to safely grow microorganisms without contamination and preparing their own bacterial agar plates. They also investigated how effective various antiseptics were on killing bacteria. Year 10 carried out practical work to investigate the vitamin C content in orange juice, comparing freshly squeezes to shop bought juice.

Year 11 investigated the biotechnology of immobilising enzymes. They isolated the enzyme lactase and used these to produce lactose free milk from normal milk. In addition, students investigated the importance of osmolarity when storing organs and tissues for transplant by investigating the effects of osmosis on red blood cells.

In Chemistry, the Year 9 students looked at states of matter by making slime and foam. They also looked at a super-cooled liquid which looks like a solid, but is actually a liquid, which just won’t freeze.

Years 10 and 11 investigated a number of areas of real-world chemistry including reversible reactions and equilibria, analytical chemistry, making electricity using the reactivity series, making pure paracetamol, finding the acid content in vinegars and analysing the copper content of a 1p coin.

Year 9 physics pupils entered Shell’s ‘Bright Ideas Challenge’ where they were asked to think about what cities will look like in 2050 and how will they be powered to be vibrant, healthy and clean places to live. The competition invited students to use their creativity, problem solving and STEM skills to devise innovative solutions that could power cities of the future.

Year 10 took this idea a little further and were given the challenge of re-designing and developing wind turbines to see if they can improve on the current technology seen off the Norfolk coast. They brought new innovation to the concept of renewable energy production and prototypes were built and tested.

Year 11 combined various GCSE skills to construct a digital clock. They furthered their understanding of circuit boards and were exposed to the different components that they would find in many everyday objects. Whilst constructing the circuits, students developed new skills, including learning to solder their creation together. They then tested it and did a ‘fault finding’ exercise, as they would if building prototype circuits in industry.

One Wednesday 10th March, Archie Hoo, OG, gave a talk to our pupils. Archie is in the final year of his Natural Sciences degree at the University of Bath, where he has majored in Biochemistry and minored in Pharmacology. He joined us online to speak about his final year project, in which he has been investigating the complex structure of the SARS-COV 2 virus, the virus responsible for COVID-19, and looking for novel sites for the action of possible future drug treatments. He also gave a talk about what university life has been like, both before and during COVID and on lessons he has learnt from being at university in the last three years. This was an amazing opportunity to hear one of our very own talk about cutting edge Science and how his studies at A level have helped him prepare for this and we were very grateful to Archie for giving up his time.

Boarding houses went up against each other in a ‘Battle Royale’ to determine which house had the most scientific knowledge. Each year group competed against each other to answer a series of challenging science general knowledge questions and the results this year were very close. Oakeley won the Year 9 competition, Tallis won the Year 10 round and Woodlands stormed away with the Year 11 prize. The Sixth Form rounds were won by Howson’s (Year 12) and Tallis (Year 13), however the overall prize for the best house went to Farfield. A consistent performance throughout led to them beating Tallis to the honour by one single point! Well done to Farfield and to all the houses for getting involved and for such a close and competitive event!

In addition, several of our Biology students in Year 12 and 13 took part in the British Biology Olympiad, representing us in this national event run by the Royal Society of Biology. This is often involving over 9,000 students in over 600 different schools across the country. Well done to James, Lucy, Afton, Alexander, Jasmin, Genevieve, Amber, Katharine, Esme, Oscar, Molly, Sophia, Thomas, Mackenzie, Paul, Ella, Shahd and Pauline for taking part.

As well as the Science department, other subject areas used the opportunity to get fully involved in Science week with their lessons.

This was a very positive way to return to school life at Gresham’s and the students really engaged with the variety of activities that took place during that week.