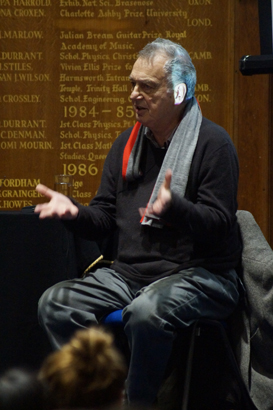 Stephen Frears (F 1954-59), one of the UK’s most celebrated and experienced film directors, has returned to his former school to meet with pupils and staff.

Mr Frears returned to Gresham’s for the first time since he left as a pupil in 1959 after accepting an invitation to feature as part of the school’s academic enrichment programme from Sixth Former, Alexander Brett (H).  Alexander and Mr Kinder interviewed Mr Frears in the school’s historic Big School Hall.  After Mr Kinder briefly explored Mr Frear’s time at school, assisted by material discovered by school archivist Mrs Liz Larby, the acclaimed director then tackled questions from Alexander and members of the audience on his work and the industry at large. It was clear from his answers that Mr Frears values surrounding himself with the best qualified people, in particular excellent script writers, above all else.

Gresham’s Sixth Former, George Giles-Loane (T) commented: “I believe Stephen Frears is a man with clear experience in the industry I want to work in. He helped me understand that if you want to achieve something you shouldn’t hesitate in going for it.”