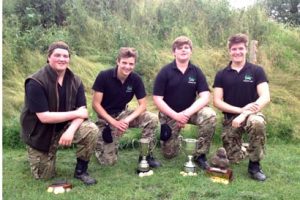 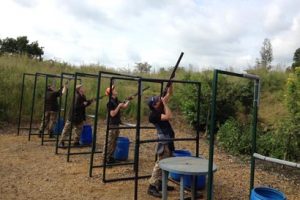 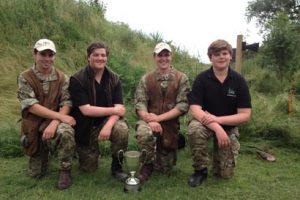 32 teams entered the competition from school CCFs and from the Sea Cadet Force, the Army Cadet Force and Air Training Corps from across the country and Northern Ireland.

James Matthews (H) won the Top National UK cadet for the shooting ‘Down The Line’ discipline with a score of 20/25.  The A team then went on to claim the Cadet Clay Shooting Wise Trophy for the winning of the team sporting flush with 47/60.

The Cadet Force 150th Anniversary Cup was won by two representatives from each of Gresham’s and Ampleforth’s CCF’s in an inter-services competition for the sporting flush competition, shooting 52/60 clays, which was a higher score than the professional VIP team that was invited to shoot on that day with Kees Jones and Theo Rossi shooting almost flawlessly.

The Anthony Reece Trophy, again with two representatives from Ampleforth and two from Gresham’s, as an inter-service competition where, as before, the CCF once again beat the Sea Cadets, Army Cadets and Air Training Cadets.   Mark Heath and James Matthews, as the Gresham’s representatives, excelled themselves.

Will Pointer (F) came third overall in the Sporting Discipline and came first out of the all the CCF cadets nationally.

Well done to every cadet who took part, Gresham’s is hugely proud of these fantastic achievements!