September 2016 Back to news 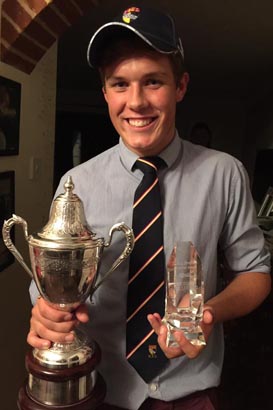 Gresham’s pupil, Hudson de Lucchi (T), has completed an exceptional season for Norfolk County Youth Cricket, scoring more than 700 runs playing for the county U15s and U17s as well as making his debut for the Norfolk Lions.

Hudson’s 724 runs came at an average of nearly 50 and included seven half centuries, one of which he scored on Gresham’s home ground.

Hudson’s highest score was an outstanding 68 for the County U17s against Cambridgeshire. Other highlights of the year include captaining the London and East of England side in a match against The Midlands as well as making his debut for the Norfolk Lions. He has successfully forged himself a regular place in Vauxhall Mallards first team, who play in the East Anglian Premier League.

At the recent County Youth Cricket Gala Dinner, Hudson was rewarded for all his hard work. For his efforts for the County U15s, he received his County cap which is a huge honour given that only four boys were capped this season.  He was also selected to for the County’s prestigious Emerging Players Programme.  Hudson is one of only six players who have been selected across all the county age groups to participate in this elite program.  The evening ended on a high note with Hudson receiving the Louis Brooks Trophy, Norfolk County Cricket’s premier Youth award for the best County player of the season.