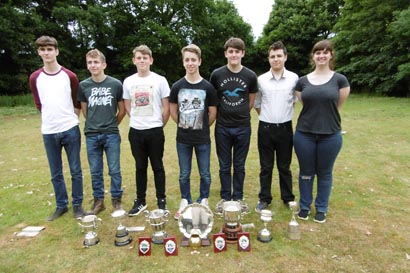 The team proudly display their awards

This is always a great event and is well supported by shooters from all over the County.

Ben Chamberlain (T) and Tobias Shalom (F) both shot in Class A and in this highly competitive Class Tobias managed to finish in 7th place which was only 11 points behind the eventual winner.  A score of 771 out of 800 was still good enough for him to win, and defend, the Junior title.

Ben finished 10th and was the only person on the day to shoot a perfect 100 out of 100 at 100 yards.  This is the equivalent of shooting a 50 pence piece, 10 consecutive times, at a distance of the entire length of an astro pitch!

In Class B Toby Little (W) shot well enough for 3rd place.  It was William Cubitt (H), in Class C, who really had to produce his very best to win the Class.  He shot exceptionally consistently throughout the day and managed to pip the second place shooter by just 2 points, out of a total of 800 points.  In Class D, Amelia Robinson (B) managed to finish 2nd in her very first competition and she was closely followed by Mrs Liberman in 3rd place.  Amelia had a particularly good day as she also won the top Lady in Classes C and D.

Very well done to all those competing at the event and some very good results by all of the Gresham’s shooters.