Last month, children in Year 2 made poppies with hand-written messages on the back and some large drawings which they sent to A Squadron 1st The Queen’s Dragoon Guards who are based in Swanton Morley in Norfolk.

The poppies arrived just before Christmas Day and members of the Squadron were overwhelmed by the efforts of the children.  It brought a lot of comfort to the soldiers who spent Christmas away from home and who really appreciated the time the children had given to prepare these. 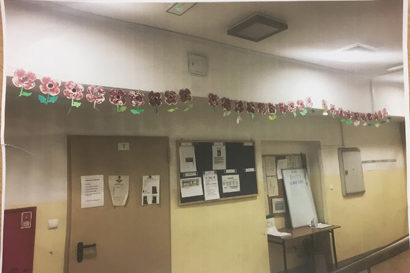 The photograph shows the poppies on display in the accommodation block.  In response to the children’s art work and messages, the school received a letter from the Squadron Sergeant Major of the A Squadron, thanking the children for all their efforts.