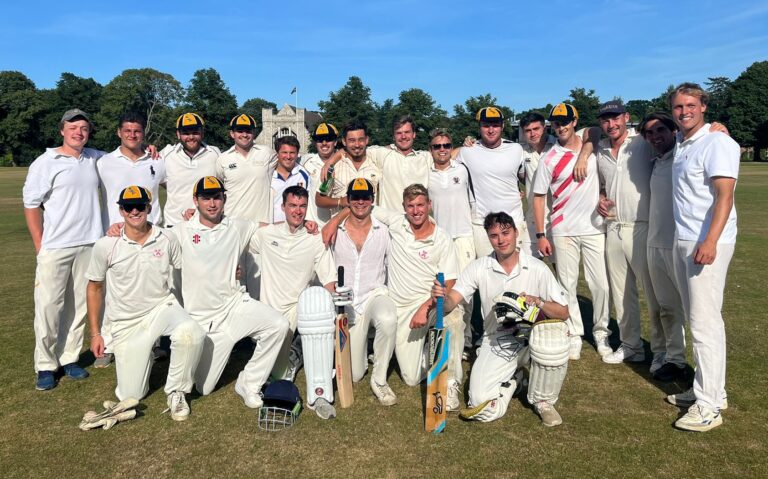 The Ramblers won the toss and elected to Bat with ‘Matthew Bromham’ & ‘Tom Beckett’ facing up to the first over of this fixture bowled by ‘Robert Wilson’ from the Invitationals. The two openers had a job to do and saw off the new ball with fantastic grace in an opening stand of 40. ‘James Buxton’ was in at 3 for the Ramblers and top-scored with great elegance and panache. The Ramblers were teetering at 85-6 when ‘Tom Lomax’ was dismissed by a stunning one handed ‘Fred Combe’ catch, the spectators and opposition brought to their feet, erupting in amazement and applause. Some last-minute maximums from ‘O.J Flux’ though knocked the wind out of the invitationals, but former Uppinghamian, ‘Cameron Mcfadyen’ had other ideas, striking regularly, finishing with figures of 5-14 from his two overs. The Ramblers bowled out for a respectable score of 127.

A fantastic lunch, watered down with plenty of Rosé nearly saw the Ramblers to a famous victory. ‘O.J Flux’ thunderbolts restricted the invitationals to 124-9 with 4 to win. Man of the match Mcfadyen finishing things off for the Invitationals to secure a famous win. A seriously fun day made possible by Gresham’s and the OG club – one hopes this can be made an annual fixture.