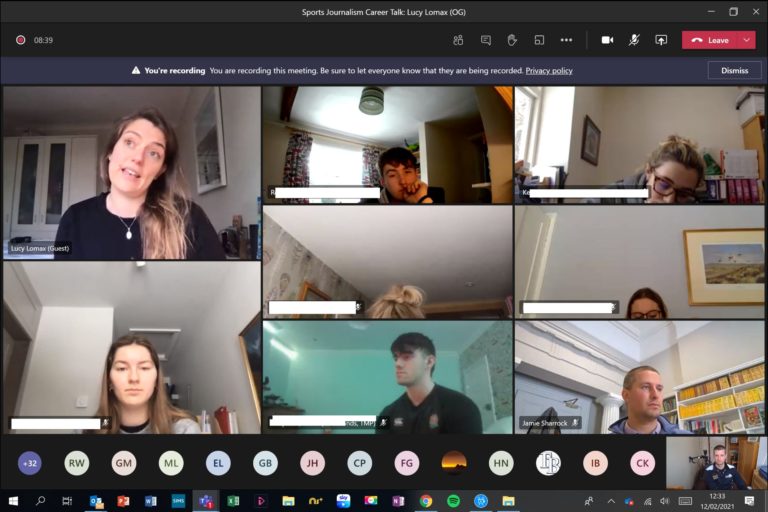 On the 12th February, Sixth Form PE and Sport pupils attended an online talk with OG Lucy Lomax, who spoke about her experiences in sports journalism, her career highlights so far and gave advice to those wanting to follow in her footsteps.

Lucy left Gresham’s to complete a sports and exercise undergraduate degree in Cardiff, before studying a master’s in journalism at St Mary’s, Twickenham. There, she learnt the important skills of writing shorthand and note taking, writing reports, and radio presenting. Staying in Twickenham, Lucy joined the Harlequins as a Communications Intern. She was responsible for interviewing players for features in the Matchday programmes, distributing team sheets, and was involved in the team’s social media platforms. She then went on to become the Assistant Producer for BBC Sport in Manchester for 10 months.

Her career highlights include covering the 2016 Rio Olympics for BBC Sports’ social media channels. Lucy also enjoyed interviewing rugby players after the 2016 Premiership final between the Saracens and the Exeter Chiefs as she supports the Saracens.

Pupils considering a career in sports journalism were given advice on how to get in to the sector. They will need the ability to think on their feet, to ask different and interesting questions, learn from mistakes, and to build connections within the field. A good knowledge of sport also helps, whilst attending matches and building up a portfolio of your work will help to prepare you for a career similar to Lucy’s.

Lucy has also created a number of podcasts that discuss sport and the surrounding topics. Her Female Athlete Podcast, that she began a year ago with a friend, covers women’s rugby and other sports, female participation in sport, and attracts 5-star reviews on Apple Podcasts. She also invites other female guests to interview. Lucy has recently started a new podcast called The Game Line with an Ireland player alongside a guest which follows women’s rugby.

We are grateful to Lucy sharing her time and insights with our pupils.