The London Children’s Camp is a separate charity to Gresham’s. The charity was set up in 1936 by a group of former Gresham’s pupils. Its aim was to “provide, in the interests of social welfare, organised holidays for needy children and young people in or near the Greater London area to improve for them their conditions of life” … and to foster as close a link as possible with Gresham’s School. In its heyday it was based on a coastal site near Kessingland, Lowestoft.

The Charity used to run summer camps – first in Kent and latterly in Kessingland, Suffolk – for disadvantaged children. In the 1970s the link with Gresham’s declined and by the mid 1990s the Charity had become dormant and its site mothballed and slowly decaying.

A group of OGs revived the Charity, spruced up the site and sold it very favourably and in recent years the Trustees of the Charity have been looking at options which allow the Charity to fulfil its primary function of providing outward bound holidays to the disadvantaged whilst also maintaining its secondary objects of ‘fostering links to Gresham’s School’. 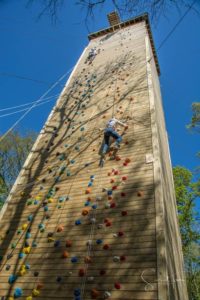 At long last the new direction has taken shape in real terms, with the building of an outward bounds centre, lodge style sleeping cabin, climbing tower, high ropes course, zip wire and obstacle course. All onsite within part of the Gresham’s School Woods a fantastic outward bounds centre. Available to the School as an extra facility in term time as a quid pro quo for the School maintaining the facility and out of term time will be available for commercial rent part of the time and available to the Charity part of the time. The Charity, assisted by the School’s suitably qualified staff, will then be able to offer again holidays each year to the disadvantaged. 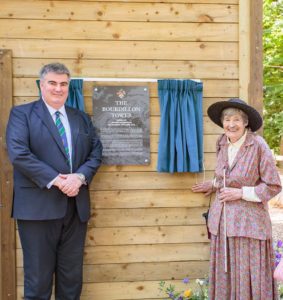 Speech Day 2018, Mrs. Jennifer Bourdillon, widow of the distinguished climber Tom Bourdillon (H 1938 – 42), formerly Headmistress of Downe House, and an explorer who has achieved distinction in her own right, formally opened the climbing tower in the school woods, named after her late husband and which will continue the work of the London Children’s Camp in a 21st century context.

More information including the opening day speeches can be found in the 2018 OG magazine.