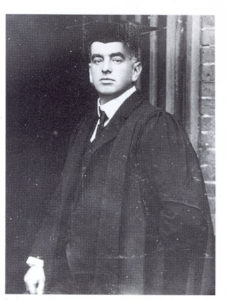 George Howson – “A single-minded, brave-hearted man of genius, a great headmaster” – who died 100 years ago today. (The Gresham Magazine – January 1919)

When Howson was appointed in 1900 there were just 44 boys remaining from the old Gresham’s Grammar School. There were nearly 250 pupils in the successful, vibrant, modern public school he left behind in January 1919. The straight-talking teacher from Yorkshire had arrived fresh from Uppingham School with no experience as a headmaster but with a fierce determination to make his mark at the school. With careful recruitment of staff and pupils and the adoption of a modern curriculum, Howson soon had an honours list to be proud of which included many boys going on to the University of Oxford and University of Cambridge.  Howson was not interested in coaching boys to pass public exams, his curriculum was designed to appeal to all, and included science, music and drama. Debates and lectures helped broaden still further the enlightened, liberal culture where games were not allowed to dominate.

His eighteen-year tenure covered the devastation of the First World War, he had been greatly distressed by the death of many of his old boys and three members of staff in the war, who had given their lives in the service of their country.

Howson was devoted to his boys, to inspiring them with his own high ideals of truth, honour and purity, and to giving them a sense of belonging in the school and the wider community. He was well-known for his fireside wit and hospitality, welcoming Old Greshamians back to visit School House for many years, as well as corresponding with them as serving soldiers.

Mr. Howson had been in failing health for some time, and went to London in the week before he died for the Headmaster’s Conference gathering and a meeting of the War Memorial committee, but returned to Holt being too ill to attend. Howson died the following Tuesday and was buried outside the Chapel that was so close to his heart with a ceremony of fitting simplicity. He was deeply mourned by the school and his trusted deputy, J.R. Eccles, who vowed to continue his great work and example as his successor.