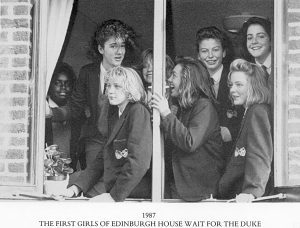 By the mid 1980s, although boarding numbers were falling nationally, Oakeley was overflowing with almost 100 girls, and headmaster Hugh Wright took the decision to build a new girls’ house. Edinburgh House was designed by Nicholas Hare to accommodate 61 girls. In his speech day address in 1987 the headmaster praised its excellent construction, good design, comfort, and spacious and beautiful grounds. He also thanked the Fishmongers’ Company for their generous donation which made the project possible. When asked if he would consent to the house being named after him, the Duke of Edinburgh insisted on visiting to open the building.

Many preparations were needed for the Duke’s visit, including cleaning, painting, scouring of stonework, etc. The Gresham magazine reported that the Duke had four armed bodyguards for protection, and the entire School was searched for explosives before his arrival. On 16th November 1987 the Duke arrived to rapturous applause and an onslaught of media attention. Children from Holt Primary School cheered, whilst Edinburgh girls hung from the windows with cameras to capture the historic moment. After visiting the modern languages department, library, Reith Block, sports hall and swimming pool, the VIP visitor toured the new boarding house and carried out the opening ceremony. A silver service luncheon followed in a marquee in front of Big School with entertainment provide by the Choral Society and a flute trio. Edinburgh’s first housemaster was popular Richard Peaver fresh from his duties as house tutor in Old School House. Under Richard’s watchful eye the new house thrived and developed a reputation as a cultured and happy place to live. It was the first house to install a computer for general use, which proved especially popular with the juniors. Richard’s educational wine tasting evenings also proved a hit, as did trips to the ballet, and his claim that he was probably the only girls’ housemaster to jump out of an aeroplane with one of his charges is typical of the way in which he threw himself into the life of the house. With Richard’s musical talents and keen sense of humour, it was inevitable that Edinburgh would produce some inspired entries in the house music competition, such as his piano-playing gorilla and the time he stole the show dressed as a leather clad-biker sporting considerably more hair than usual! With Paul Hands as house tutor, Edinburgh also produced some impressive plays such as Bugsy Malone with ‘Fingers’ Peaver on the ivories. The house won the debating competition and did well in house art. Anna Saltmarsh became the School’s first female School Captain, followed by Sarah Raine, and the house notes commented, “After 436 years of male domination, it was indeed time that a girl should occupy that important post.” In the mid 90s the house played some very competitive sporting fixtures against Oakeley, securing a comfortable win at netball, plus wins at senior tennis and rounders. Charlotte Aldridge was selected to represent Great Britain against Canada at shooting, whilst Josie Gibson achieved some notable success at sailing, and Sophie Wright represented Norfolk at tennis.

By the end of the 90s however, house notes commented “Edinburgh House may not be renowned for its capability on the sports field, but what we lack in skill, we make up for in spirit.” Mr Peaver was constantly heard to remind the girls that it’s the taking part that counts! In 2001, the Edinburgh girls managed to astound games staff with their achievements, including wins in cross country and netball. Becky Amies won all the events she entered at Sports Day and achieved a new School record for high jump.

With growing numbers in the mid 90s, the house was bursting at the seams, and some 5th and 6th formers were moved into the newly decorated Old San Annex next door under the watchful eyes of Mrs Thompson and Mrs Ferris. Here they were able to enjoy some much needed peace and quiet, whilst also still being involved in house activities. It was soon announced that the Old San was to be converted into a new house – Britten – with Mrs Thompson as it first house mistress, and the present occupants would be joined by girls from Oakeley. Moving on to the next decade it was time to say a fond farewell to Richard Peaver. The Gresham magazine paid tribute to him and his wife Julia who had formed “the caring and loyal centre of the house”, attributing each of Edinburgh’s successes over the years to them. Richard would be sorely missed for his strong leadership and eagerness, not to mention an endless supply of ‘witty’ jokes and wealth of ‘useless’ trivia.

Apart from welcoming new housemistress Sonia Radley in 2001, Edinburgh also benefited from a new kitchen and prefects’ room. Breaking Oakeley’s run of six years, they won the house music competition, as well as producing an impressive display of artwork in house art – Becky Flynn won the Judy Hines trophy and three other individual section winners helped boost the fortunes of the house. The following year saw a record-breaking number of matrons come and go, and the fun and games continued with topical 5th form sketch ‘The Big Radley House’, complete with video diary room, and the 4th form’s sketch about a visit to Hogwarts. Some very talented juniors won hockey, tennis and athletics competitions, and in true Edinburgh style, as reported in house notes, although the seniors were more ‘athletically challenged’, morale was typically high and socks typically stripy! Towards the end of the decade the Edinburgh house spirit and enthusiasm was starting to pay off on the sports fields, resulting in wins in all the senior and junior inter-house competitions in hockey, netball and tennis. Charlotte Long and Sophie Mullan were selected to represent the East of England at athletics, whilst Freya and Polly Quick both played hockey for Norfolk. Edinburgh was the only girls’ house to enter the iron woman competition as a team. Alex Paske was head of School and captained the first hockey team which included ten Edinburgh players. Many Edinburgh girls played in the first netball team, and the house retained the Girls’ Inter-House sports trophy for the third year running.

The Edinburgh calendar in which girls dressed up to represent different countries became an annual feature of the School year, and Harriet Flower gained a place in the National Youth Choir. The house said goodbye to long-serving member of the domestic team Mrs Warnes after 21 years service, and welcomed new matron Moira. Fund-raising efforts were stepped up, with Sophie Mullan braving the wintry elements by attending a BOP party in her bikini, and having her head shaved in public with Rose Wilk-Mullis, raising £1000 for Cancer Research UK. In Summer 2001 Connie Birch was Head of School, continuing the success of the house.  Although 25 years in Gresham’s terms is a very short time span, it is important that the history of the house is not overlooked, and I would be very grateful for any archive material – photographs, play programmes, house newsletters, etc – that ex-residents could contribute to the School Archives for posterity.