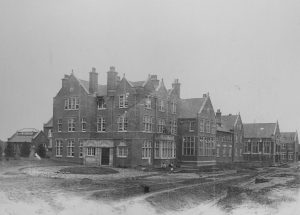 One of the new buildings designed by architect Chatfeild Clarke and opened in 1903 by Field Marshall Sir Evelyn Wood, it was home to reforming new headmaster George Howson who assured the audience at the opening celebrations that the excellent buildings and laboratories must be the envy of other schools. The housemaster was crucial in creating the unique atmosphere at Gresham’s, and Howson would walk around his house talking to the boys in their dormitories. His dinner parties would stop for guests to attend house prayers. Geoffrey Shaw recalled that “An evening in his company was a refreshment”. Shrewd and humorous, with a fund of good stories at his command, Howson excelled in fireside conversation and his after-dinner speeches were legendary.

Parents, guests and OGs were welcomed into this hospitable house, and Howson took holiday parties to Bolton Abbey, on the Broads and the Thames. Prefects played an important role, but did not rule the house. “In our Prefects” declared Howson, “we look for unflinching straightforwardness, desperate earnestness and untarnished honour.” Windows were not barred, as at many other schools, and doors not locked. Boys looked to their housemaster for leadership and guidance. Fred Jarvis was speaking for many OGs by saying “We think of him as one who has been to us a very good father; who gave us our best gifts, our highest ideals.” One Howson’s OG who strove to reach unconquered heights was physicist and mountaineer Tom Bourdillon (1938-42) Tom developed the closed-circuit oxygen apparatus used by himself and Charles Evans on their pioneering climb to the south summit of Everest in 1953. Having completed the climb to within 300 feet of the summit in record speed, the two men were forced to turn back due to exhaustion, the credit going to Hilary and Norgay who reached the summit three days later. Sir John Hunt remembered Bourdillon and Evans making an awe-inspiring sight, “they looked like figures from another world”, being encased in ice from head to foot! Tom died in a climbing accident, aged 31, and it is only recently that his name has emerged from relative obscurity as the full potential of his innovation in breathing equipment is realised.

During World War II Howson’s played host to forty boys and girls evacuated from the East End of London. Three children stayed on the private side with the headmaster, Phillip Newell, and his family. Pyjamas were a novelty to them, and initially they slept, as was customary, under, rather than on, their beds. Troops and evacuees were entertained with the comedy play Tons of Money in Big School. A Christmas party was held with a gigantic tree and a present for each child. In the late 1960s, early 70s, an extension was built onto Howson’s to accommodate bedsits for VI formers. More recently, in 2008, the house became temporary home to the School Archives which took over a suite of boys’ studies known as ‘The cage’. The collection includes registers, photographs, books by and about OGs and staff, Gresham magazines, school lists, pupil diaries, and much, much more.