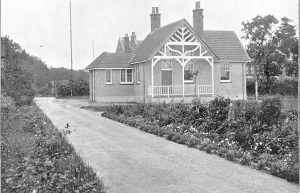 Here come the girls! – the story of Oakeley

Girls from Runton Hill had joined pupils at Gresham’s for science and social events since the return from wartime exile in Newquay. The first direct-entry day girls were accepted to study for ‘A’ levels in 1971. Five more girls soon followed and the demand for co-education was growing. Out of the first twenty girls to enter the VIth form, 19 gained university places. At Speech Day in 1977 the headmaster, Logie Bruce-Lockhart ended with a word of praise for the girls, saying “we like them, they work hard, they contribute largely to the civilisation of the school”.

Oakeley House was opened in time for the start of the new term in September 1978. Based on the Old Sanatorium, built in 1903, with a new purpose-built extension, the accommodation was far superior to the cramped conditions the pioneers had endured in the early 70s. A 1924 register of patients housed in the School Archives gives an insight into previous occupants. Amongst the familiar childhood illnesses, the measles, mumps and chicken pox, we find several cases of scarlet fever, and note that 50-60 cases of influenza were not uncommon in winter. The new boarding house boasted ten bed-sits, a ‘T’ bar, tutor’s flat, new cooking facilities, showers, and a common room, and housed 55 girls. After much consideration it was decided to name the house in memory of Dick Bagnall-Oakeley who had recently died within months of retirement from the staff. Dick was one of the great characters of Gresham’s, an OG, Head of School, who taught at Newquay, he spent almost his entire life connected with the School. A talented naturalist, photographer, broadcaster and raconteur, he taught geography and games, as well as developing a shooting squad. At the opening ceremony the headmaster, who was a great friend of Dick’s, placed the house in the capable hands of John and Jenny Rayner. He mentioned the necessity of making new rules to cover visiting rights between houses and the suspicion of female pupils by ‘many males who felt vaguely threatened’. Logie took great pleasure in announcing that Helen Jones had achieved a place at Cambridge, warning “Watch out Oxbridge, Gresham’s girls have arrived.”

Oakeley was soon doing well in house music and drama competition, and it was acknowledged that “play producers welcomed the chance to cast ‘real’ girls instead of embarrassed boys with size-11 feet.” The girls were fortunate in their housemaster who was a play producer as well as an English teacher. Their first offering in 1979, The Prime of Miss Jean Brodie was described in The Gresham as “a fine, intelligent production, with much commanding, sensitive and memorable acting.” John’s retirement notice records that he fought battles for the girls, arranged games and activities for them, and instituted the Valedictory Ball. It ends by stating simply that “Oakeley House was the Rayners’ creation”. At least two Oakeley girls have been inspired to become actresses: Sienna Guillory who took part in many school productions and went on to appear in films such as Love Actually, Resident Evil, and Inkheart and Olivia Colman who has appeared in a lead role at the National Theatre and made many TV and film appearances. Another Oakeley character was Sue Smart who was the first woman in charge of a Gresham’s boarding house. In 1993 when she moved in there were 84 girls. Her tenure saw the renovation of ‘The Grots’and the conversion of ‘The Cottages’ to increase numbers to 100. Her ‘Smartie Parties’ are legendary, and Oakeley girls also remembered her for her kindness and support. Senior housemistress Fiona Gathercole has also left her personal stamp on Oakeley, both as an OG and as housemistress. The Gresham predicted in 1986 that she would have a considerable influence over girls’ games, hoping to start girls’ cricket and seeing no reason why girls could not play rugby! Memories of Oakeley, and of the other girls’ houses, are greatly under-represented in the School Archives, and I would be delighted to have some stories, photographs or other ephemera to add to the collection for posterity.

Sarah (Olivia) Colman (1990-93) Actress best known for supporting roles in comedy TV shows such as The Office, Green Wing and The Peep Show. She has also had lead roles in films such as Hot Fuzz and Confetti. More recently Olivia appeared in the TV drama Broadchurch and has been named best actress at the Television Society’s awards.