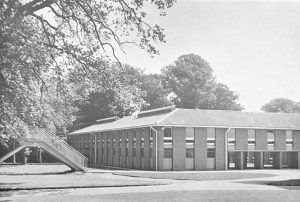 ‘Gresham’s new flagship boarding house’ was named after Thomas Tallis who was master from 1606-39 and 1640. Arriving at Holt, he found no pupils at the grammar school and soon set about making changes to attract some. The library was improved, and a salary secured for an usher or assistant to teach the boys. By the time he died in 1640, numbers had risen to forty, and over twenty-five boys had been sent to Cambridge. Tallis had requested that the Fishmongers’ accept his resignation in 1617, ‘by reason of his age, dymnes of sight and hearing decayed’, but he was still teaching in 1638 when the Company received reports that many local gentry were removing their sons. A monument to Tallis in Holt Church was sadly destroyed in the Great Fire of 1708. A former hotel in Holt, The Lawns, served as temporary accommodation for pupils from 1962 until the new house was ready for occupation. With ‘Jumbo’ Burrough as housemaster and few residents, mealtimes were chatty and civilised, and the atmosphere generally relaxed. One OG remembers an occasion when a travelling rug had been propelled from a top floor dormitory window after lights out. Two boys ventured outside to retrieve the rug but were horrified to discover it dangling outside the housemaster’s open study window! A passing policeman luckily saw the funny side of the escapade and assisted with ‘Operation Rug Recovery’, no doubt saving the perpetrators a considerable amount of trouble. Tallis was opened on 21st September 1963 by Sir Colin Anderson, Prime Warden of the Fishmongers’ Company. It was described in The Gresham as being ‘of contemporary design’ with the capacity to house 47 boys in bed-sits and 16 in dormitories. The Headmaster, Logie Bruce-Lockhart, said he was confident that Tallis had the ‘best boys’, an ‘excellent’ housemaster and a ‘formidable’ tutor. He asked the audience to remember that bricks and mortar do not make a good boarding house, but this happens by the traditions created in its first few years.

The proud headmaster would always include the new house in his tour for prospective parents, raising his voice by several decibels on entering to warn the residents. On one occasion the head of house and a friend were enjoying a musical break from studying when they realised a tour was imminent. Whilst the room’s owner quickly turned off the music and returned to his book, the hapless head of house chose to seek refuge in a cupboard. The headmaster, in demonstrating how spacious and well-fitted the new studies were, unwittingly revealed the crouched figure. With practised ease and good grace, Logie simply introduced the boy and carried on with his tour. Two boys waited nervously for a call to the head’s office which never came!

Tallis has seen some great characters as housemasters in its short history, not least the first incumbent John Coleridge who was a great promoter of arts at Gresham’s and a keen play producer, ending his career as acting head in 1985. During his tenure Tallis became known as a house of musicians and arts students. Michael Barrett was a long-serving and charismatic house tutor who did much to encourage and promote the cultural life of the School with wine-tastings, Medieval banquets, debates and plays. More recently, Peter Paskell, who retired in 2009 who will be remembered for his sailing and rugby exploits, and Peter Farmer-Wright whose untimely death in 2008 inspired the naming of a rugby pitch in his honour, deserve special mention. The Farmer-Wright run has become a house tradition which takes place each May at an ungodly hour and sees Tallis charge enthusiastically into the sea at Sheringham after a six-seven mile jog. The house boasts rugby players Tom and Ben Youngs as its most famous sons. The brothers both earned places in junior England squads and have played for Leicester Tigers. Tom Youngs (1995-2004) started playing aged 5 and fell in love with the game whilst at Gresham’s coached by Peter Farmer-Wright. Scrum-half Ben (1996-2006) also honed his skills on the fields of Tallis, both boys following in the famous footsteps of their father Nick (Farfield 1976-78) who played for England in the 1980s. Another Tallis OG of note is deputy head Nigel Flower (1968-73) who featured in school matches in rugby, cricket and hockey, as well as achieving the rank of prefect. More recently the house can claim a member of award winning classical boy band Blake, Humphrey Berney, who left in 1998.

As part of the recent major refit, the School Archives, which was given a temporary home behind the stage when it was established in 2005 as part of the 450th anniversary celebrations, was rehoused in more suitable and permanent accommodation in Howson’s. During my brief stay I was able to enjoy tuneful rehearsals for house music competitions, many a noisy table tennis match, and not to mention hosting the odd game of hide and seek! It would be wonderful to have some memorabilia and memories of the house for the archives as Tallis appears to be sadly under-represented in the collection at present.