Following a professional exchange visit to Charterhouse in 2010 I was able to trial a World War I project with Year 9 pupils as part of their history studies.

Pupils have visited the archives in small groups and researched the life and death of an OG in pairs using historical sources avaiable such as Gresham magazines, school lists, photographs and house books, plus resources on the web. The project has proved very popular with pupils and has helped to bring history to life, giving them a unique opportunity to use a real archive and carry out some original research for themselves.  Some excellent results have been achieved as illustrated below. This Term, pupils in Year 9 have continued their work on WWI in History, with a particular focus on the boys from Gresham’s who fought and in significant number, fell in the conflict.

Pupils have worked in groups to launch their own research project based upon an old school photograph. Their task was to find out all that they could about the young men in the photo, those that fell and those that survived. They have, in most cases, had the opportunity to visit the School archives, and to use the School registers and various School magazines and national databases to research and present their findings.

They have produced work of a very high standard, worked collaboratively to corroborate evidence and to meet tight deadlines. In consequence Year 9 have learned much about the methodology and the pitfalls of genuine historical enquiry. It has been a fascinating and highly important process and one which the students have clearly engaged with and enjoyed. 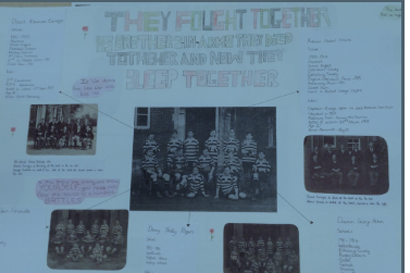