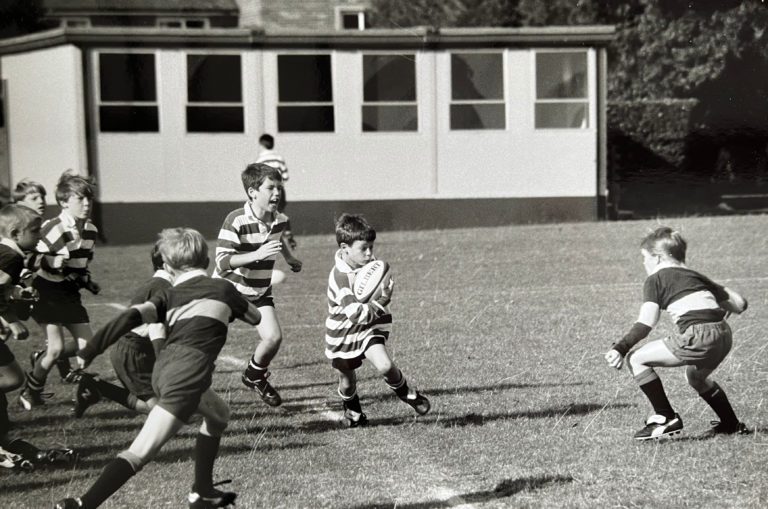 Ben attended Gresham’s from 1996 to 2005 and represented the school’s rugby team throughout his time here.

Ben Youngs comments “I look back on my Gresham’s days with fond memories. I am very grateful to the school for starting my rugby journey.”

Looking back at school magazines, it’s clear to see that the scrum-half’s talent was recognised at an early age. Reporting on the U14A team at the time, one coach said “Ben has the speed necessary to cut open defences and scored many a try using his twinkling feet. It must also be said that Ben has a feel for the game, which means that he usually makes the correct decisions.”

Following his GCSEs, Ben was invited to attend the Leicester Tigers Academy. He also played for the England U16, U18 and U20 teams before making his Senior England debut in 2010. Talent for the sport runs in the Youngs family, Ben’s father Nick and brother Tom also attended Gresham’s and went on to play rugby for Leicester Tigers and the national team.

The incredible achievements of Nick, Tom and Ben continue to inspire rugby players here at Gresham’s. We maintain strong links with Leicester Tigers and regularly see players from our First Team in the starting line-up for Tigers’ academy fixtures.

Douglas Robb, Headmaster said “Many congratulations to Ben on this fantastic achievement. The record speaks for itself but more than just an outstanding rugby player, Ben is a terrific role model for our young people. The whole Gresham’s family are proud of this landmark achievement, but more importantly we are proud of him as a person.”

Richard Brearley, previously Rugby Coach and Deputy Headmaster of Gresham’s Prep School said “This is a magnificent achievement from a wonderfully talented rugby player. It is his electric pace, competitive spirit and determination that I remember about him at Gresham’s. He was a match-winner who was a pleasure to coach and I have thoroughly enjoyed following his career with Leicester Tigers, England and the Lions.”