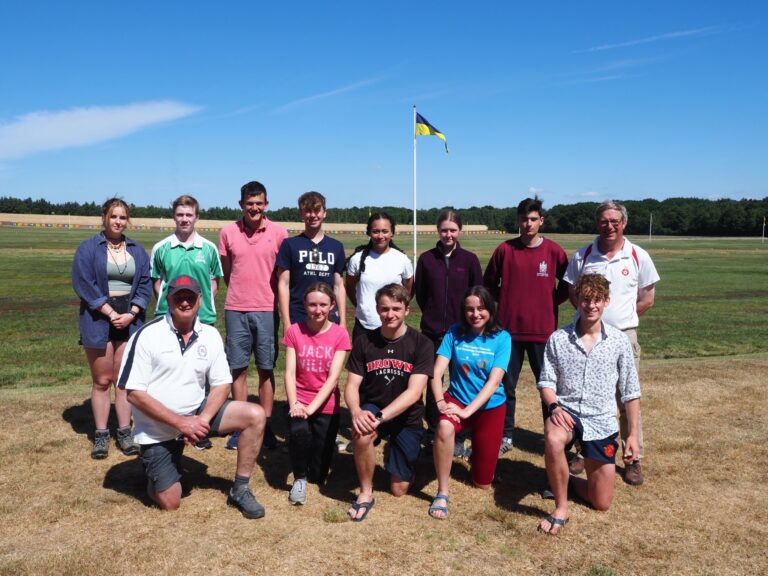 Thirteen members of Gresham’s Rifle Club remained at Bisley to compete in the National Rifle Association’s 153rd Imperial Meeting, which took place immediately after the Schools Meeting. Every member of the team shot well in the exceptionally hot and sometimes tricky conditions. The newer, less experienced, members of the team were all on fairly steep learning curves, whilst the more experienced shooters in the team were trying to compete for the very top scores.

There was national representation, on day one, for both Hannah B and Fergus R as they were both selected to shoot for England in the Cadet National Match.  Despite both shooting very well for the England team, it was the Channel Islands that took the victory at the end of the match with England in second place.

During the Imperial Meeting, there are two Schools team matches that run concurrently with the Grand Aggregate. The Gresham’s Rifle Club team of Georgie C, Louis H C, Harry P and Fergus R were able win, and retain, the Garry Jones Trophy for another year.  The same team was selected to shoot for the Anstey Trophy but unfortunately had to settle for 2nd place, as Wellington College beat the Gresham’s team by just a single point this year.

In the ‘Big Three’ individual competitions, the team had a reasonable showing, with Louis H C and Oliver R both making the 2nd Stage of the St. Georges Prize. In Her Majesty the Queens Prize, Hannah B, Georgie C and Harry P all progressed to the 2nd Stage but unfortunately, no one shot well enough to progress through to the Final which, this year, was won by a Cambridge University Student called Alice G (very well done to her). The other big individual competition during the week is the Grand Aggregate and, out of the 700+ competitors (from around the world) taking part, Harry P managed to shoot consistently well throughout the week to finish 152nd. Out of the 150 Cadets competing in the Grand Aggregate, Harry finished 3rd, Fergus was 4th and Hannah was 8th, with 8 of the 13 Gresham’s pupils finishing in the top 50.

The team decided to enter a few additional shoots towards the end of the week and they managed to have huge success. Georgie C won the Barlow (900yds), Harry P won the Stickledown (1000yds), Hannah B won the Howard Wilkinson (300 + 600yds) after a tie shoot with Harry P, Harry went on to win the PW Richardson (500 yds) and the Chairman’s Prize (900 + 1000yds).  An amazing last couple of days.

Finally, we would like to wish Hannah B and Georgie C all the very best on their tour with the British Cadet Rifle Team (the Athelings) and Louis H C and Harry P with their tour to the Channel Islands with the UK Cadet Rifle Team. Thanks must go to all members of staff that have assisted, in whatever way, with the running of the Rifle Club over the past year. May 2022-23 be an equally successful year in the small-bore range and an even better year on the full-bore range. Bring on the Ashburton!