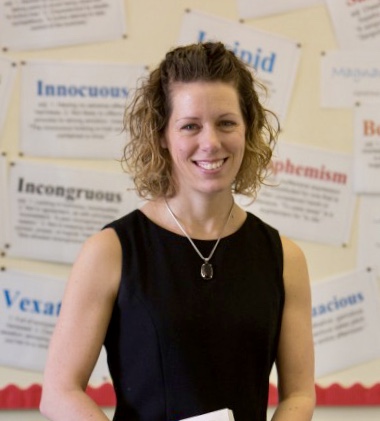 Olivia Ravilious is the current Housemistress of Oakeley House. Olivia lives in Oakeley with her husband Rob, along with their son, William and their daughter Madison.

Olivia is passionate about healthy eating and enjoys trying out new healthy recipes on the girls in Oakeley as well as talking about anything to do with nutrition. She loves most types of exercise, but gains most enjoyment from Hiit and weight training, Pilates, Swimming, and Taekwondo. As a family they love travelling and exploring new places and have a very long wish list of places they want to visit. They prefer to be outdoors walking or cycling together, but do enjoy cosy nights in with a movie and pizza and maybe even ice cream! When she is not in the House she can be found teaching English, PSHE and Pilates.

Oakeley House, the oldest of the girl’s houses, is named after Dick Bagnall-Oakeley, Old Greshamian (OG), Geography teacher at Gresham’s (1933-’68), and radio and TV presenter of Natural History programmes.

Originally built in 1903, situated on the south side of the Cromer Road, the ‘House’ was the School Sanatorium until the mid-late 30’s when what is now Queens’ House was built for the role. It then became staff accommodation until about 1972 when girls started to join Gresham’s in small but steadily growing numbers.
The ‘new’ East Wing at the Library end, was built in 1977/’78, and the girls’ house accommodating 50, was finally established. When numbers in Oakeley reached 100 a second girl’s house (Edinburgh) was opened.

In 1988 an extension was built to accommodate junior boarders and the cottages were given a major overhaul in 1994 to provide more senior boarding accommodation.

The central part of Oakeley has been completely rebuilt. The new central block was started in the old garden and the East and West wings were renovated in July 2016 and the original house at the centre was demolished in July 2017.