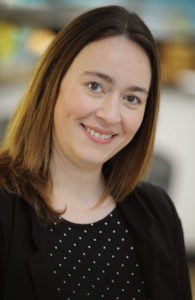 Virginia Seldon is the Housemistress of Queens’ House. Vi arrived to Gresham’s nine years ago as a Spanish assistant, having studied English and Spanish at the University of Valladolid, her hometown, and did her PGCE at Buckingham University. She was a resident tutor in Britten House for two years before becoming Head of Spanish, a role she continues to fulfil.

She is married to Mark, who is the Director of Studies at Gresham’s and they have a little boy, Oliver and baby Mia. Mark has an older son, Harry, who attends Gresham’s Prep School.

Queen’s House has a very special and beautiful location on the North East edge of the campus, backing onto the School woods and overlooking the playing fields, Chapel, and the Auden Theatre. It has a particularly colourful and cheerful interior and a new Upper Sixth Form wing. It has a warmth and vibrancy which are quite unique and is currently home to around 71 girls, including boarding pupils and day girls.

The majority of Lower Sixth and all Upper Sixth have single rooms, the latter being housed in the newly built Upper Sixth Form wing on the first floor.