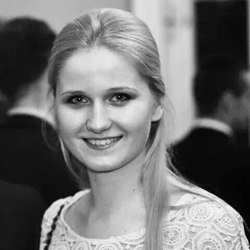 I came to Gresham’s from the Republic of Moldova in 2010, after having been incredibly lucky to be selected to receive a scholarship and be awarded the Headmasters’ and Headmistresses’ Conference by Gresham’s that year. Therefore, I did not choose the school, Gresham’s chose me and I am thankful that it did.

My time at Gresham’s provided me with a number of experiences that have helped to shape the person I am today. I came in touch with people who supported and cared for me in so many different ways, such as my housemistress and matron; people who encouraged me, such as Mr Kinder, the Head of History, and the assistance I received with my UCAS application.

Being an overseas pupil, I was a full-time boarder, which meant I had the time and opportunity to settle in and make new friends in my boarding house, Queens’ House (formerly known as Britten). The House Music Competitions were unique opportunities to meet new friends and become part of a big family who worked and sang together in order to win the coveted cup.

I owe so much to Gresham’s School and its staff members. The choice of university was influenced by the Head of Sixth Form at the time and my subject choice of Economics was due to the Head of Economics who nurtured a special love for the subject in me.

Why I choose the IB Diploma?
I chose the IB Diploma because it provided a broad choice of subjects which included Languages, Maths and Social Science, so it seemed a perfect fit for me. I didn’t realise it at the time, but the IB Diploma would develop a number of skills which would later prepare me for life at University. The Theory of Knowledge (TOK) and its assignments helped develop my critical thinking and, I believe that overall, the IB Diploma gave me an advantage in today’s difficult employment market and helped me to think on different levels and analyse problems from different perspectives. The course wasn’t easy and, with homework deadlines to meet it was sometimes difficult to juggle but, it was all worth it.

University
I studied for my B.Sc. in Economics at the New College of the Humanities (NCH) in London where I also was awarded the NCH Diploma for Liberal Arts, for which I took a minor in Politics, courses in Applied Ethics, Science Literacy, Logic and Critical Thinking, and the Professional Programme. I could not have been happier with my choice of university, it exceeded my expectations as it was more challenging, more enriching and more satisfying than I thought Higher Education could ever be.

In 2014, I was involved in an internship, doing economic research for six months for a Dutch economic research and consultancy. In June 2015, I moved to Germany, initially for a six-month internship in the retail branch of Deutsche Bank, which was then extended to twelve months. Following the Brexit vote, I took a full-time position from a consulting firm in Germany, BearingPoint, and started to work harder at improving my language skills. Consulting was fun and challenging, full of growth opportunities. As a consultant, one is normally sent to clients, like banks or other financial institutions, on projects and my only client was Deutsche Bank, where I worked on a couple of long-term projects. On my last project at the bank, they offered me a full-time role in their Anti-Financial Crime unit, to work in Sanctions and Embargoes. In August 2018, I started work at Deutsche Bank, where I have worked for three years, first as an intern for a year and then as an external consultant for two years.

In terms of future aspirations, I would like to keep on developing my career and explore new opportunities. I really miss the UK and I believe this springs from my time at Gresham’s and the fact that I do, often, identify as a Brit.

Studying for the IB Diploma at Gresham’s and Economics at NCH helped me to wear different hats and juggle different roles at the same time. It taught me to deal with challenges both inside and outside of the classroom, to work hard and just go for it, however impossible it may seem at times.  In my professional life over the past two years, I have faced many challenges but I have just kept going and continued to work hard.