The Auden Society covers a range of topics 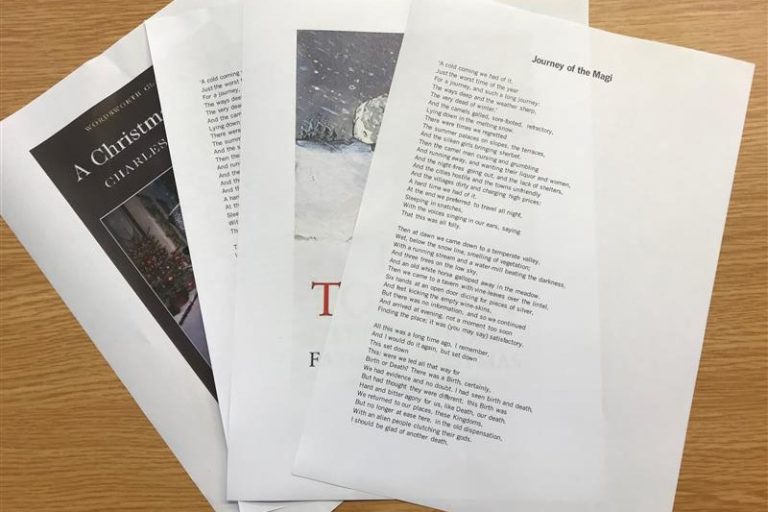 News > The Auden Society covers a range of topics

The Auden Society had something for everyone a their most recent meeting. Mr Hipperson opened with TS Eliot’s Journey of the Magi and, although not the most cheery of poems, it was an excellent opportunity to explore what we know of the ‘Three Wise Men’, using evidence from the Bible and Eliot’s imagined narrative perspective of the magi in his poetry. Mr Hipperson illustrated the links between Eliot’s own dramatic conversion to the Anglican faith and the allegorical aspects of the poem. George L followed with a sensitive response to J.R.R Tolkien’s Christmas Letters, written to his children between 1920-1943, but published posthumously in 1996.Tolkien fans in the audience were unaware he had written letters to his children every year, developing the escapades of Father Christmas and his accident-prone polar bear. George beautifully read one of the letters aloud and then posed the important question of whether Tolkien’s daughter-in-law’s decision to publish the letters violated the intimacy of a private memory between father and child, or whether these concerns are outweighed by the valuable insight they give into the early inspirations for the fantastical worlds Tolkien later created.

Lucy M, Auden Society President, then brought us to A Christmas Carol, which, for many, is the epitome of Christmas. Lucy highlighted the technical brilliance of Dickens in creating a humorous narrator, as well as pausing on the detail Dickens gives in his characterisation. Lucy’s discussion of Dicken’s original text led us perfectly to our final speaker, Emily R – and what a finale it was! Emily’s assertion that The Muppets Christmas Carol is the best adaptation to film surprised many, after all, who can resist a green felt frog singing about the woes of poverty in an Americanised Victorian London? Her passion for the film shone through as she talked us through her extensive research; much to our surprise there are over a hundred lines of the original novel in the film. Her argument for The Muppets Christmas Carol being the best film adaptation was persuasive, although Mr Hipperson, despite his love of musicals, may need more convincing!

This was a wonderfully festive evening and brought our first term of thought-provoking literary discussion to a close. The Auden Society will meet again in February.