The first ever girls’ 1st XI match was a momentous occasion 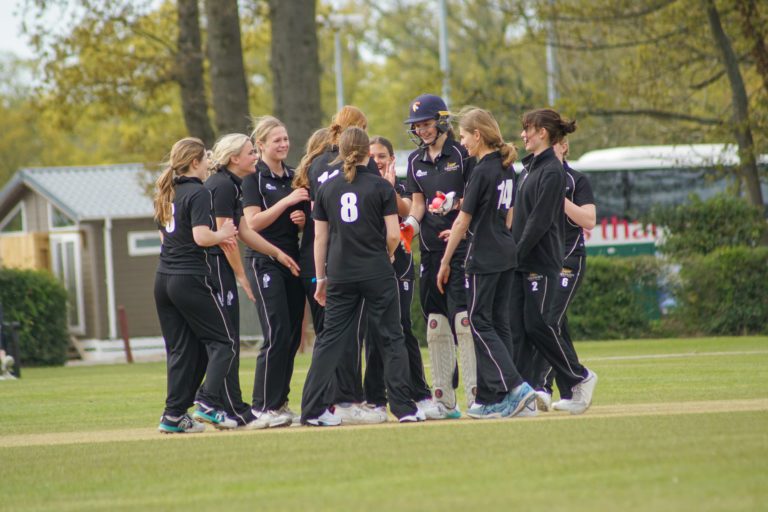 The first ever girls 1st XI match was a momentous occasion and the team rose to the challenge with 5 Year 9s, 4 year 10s and 2 year 11s turning out against a far more experienced Leys XI.

Losing the toss, we batted first and settled into a decent rhythm with Esther B (25 not out) and Grace H-K (13) leading the way, eventually posting 82 for 5 off our 20 overs.

Bowling second was a tough task on an increasingly windy afternoon but the 6 who took the ball all showed that we will have plenty of fire power to win in future matches. Charlotte G looked particularly menacing with some impressive pace and Poppy G showed consistent line and length.

In their second game, the team played Norwich School in the first round of the National Cup and progressed thanks to an impressive performance with both bat and ball.

Losing the toss and being put in the field, we nevertheless started strongly with Charlotte G taking 1 for only 12 runs off her 4 overs. Charlotte T and Grace H-K both took 3 for 16 and we restricted Norwich to 92 for 9 off their 20 overs.

Esther B and Charlotte G started brightly in response and by the time Zara U-B had quickly got to double figures, the match was looking well-placed for a Gresham’s victory. Grace H-K made sure with a swash-buckling 36 runs, finishing with five 4s in 12 balls. The win was secured with two and a half overs to spare.

The Firsts ended 94 for 4 and will play Leicester Grammar School in the next round. Player of the Match was Grace H-K.