The Music department have enjoyed a busy Michaelmas term 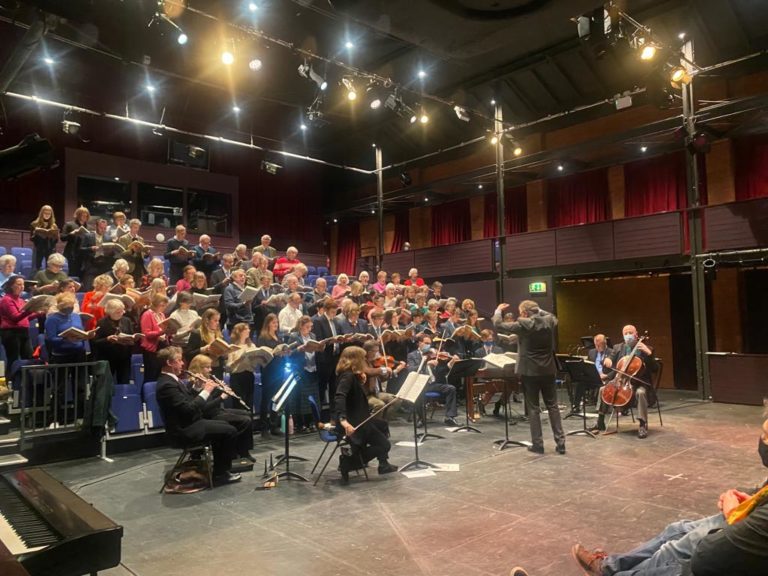 News > The Music department have enjoyed a busy Michaelmas term

Jingle all the way
Such is the speed and range of creativity at Gresham’s, no sooner had the curtain come down for the final time on Little Shop of Horrors, the Auden stage was transformed into a Christmas set with tree, presents, a tastefully, yet festively lit Steinway Concert Grand and platforms for an array of musicians to perform from. Audrey 2, of ‘Little Shop’ fame and well known for her penchant for ‘fresh food’, took up residence in the theatre foyer on a promise to behave and the sounds of Christmas resonated through the Theatre.
A total of 96 pupils performed to a capacity theatre, entertaining a lively audience who clapped and joined in at every opportunity. Chapel Choir made a welcome appearance away from their usual Chapel setting and opened the evening with choral classics and O Tannenbaum and O Holy Night.
Concert band wowed the audience with Fairytale of New York and Feliz Navidad and Orchestra gave a nod to that favourite of Christmas ballets and played The March from The Nutcracker suite. Strings and Brass Group took a turn with Let it Snow and White Christmas as did vocal, clarinet and violin duets and Chamber Choir. House Music Part Song winners Oakeley performed Take Me to Church along with Farfield reviving their winning instrumental Canned Heat. Tallis’ Part Song Sh-Boom with its impressive barbershop harmonies completed the House Music set.
During the interval Father Jack and his band of helpers sold mulled wine and mince pies in aid of the Holt Youth Project, after which the volume ramped up a little. 6th formers’ band ZZ Topson gave their own rendition of Stacey’s Mum, or Santa’s Mum and Jumpin’ Jack Flash and Mr Curtis’ Collective took to the stage with a set including This Christmas and a festive version of Earth, Wind and Fire’s Septebmer, or rather December.
The evening concluded with Schola singing a particularly entertaining version of The Twelve Days of Christmas arranged by Bob Chilcott and that all time favourite, ‘Have yourself a merry little Christmas’.
The concert involved a huge number of performers and staff and thanks to all who made the evening such a success. 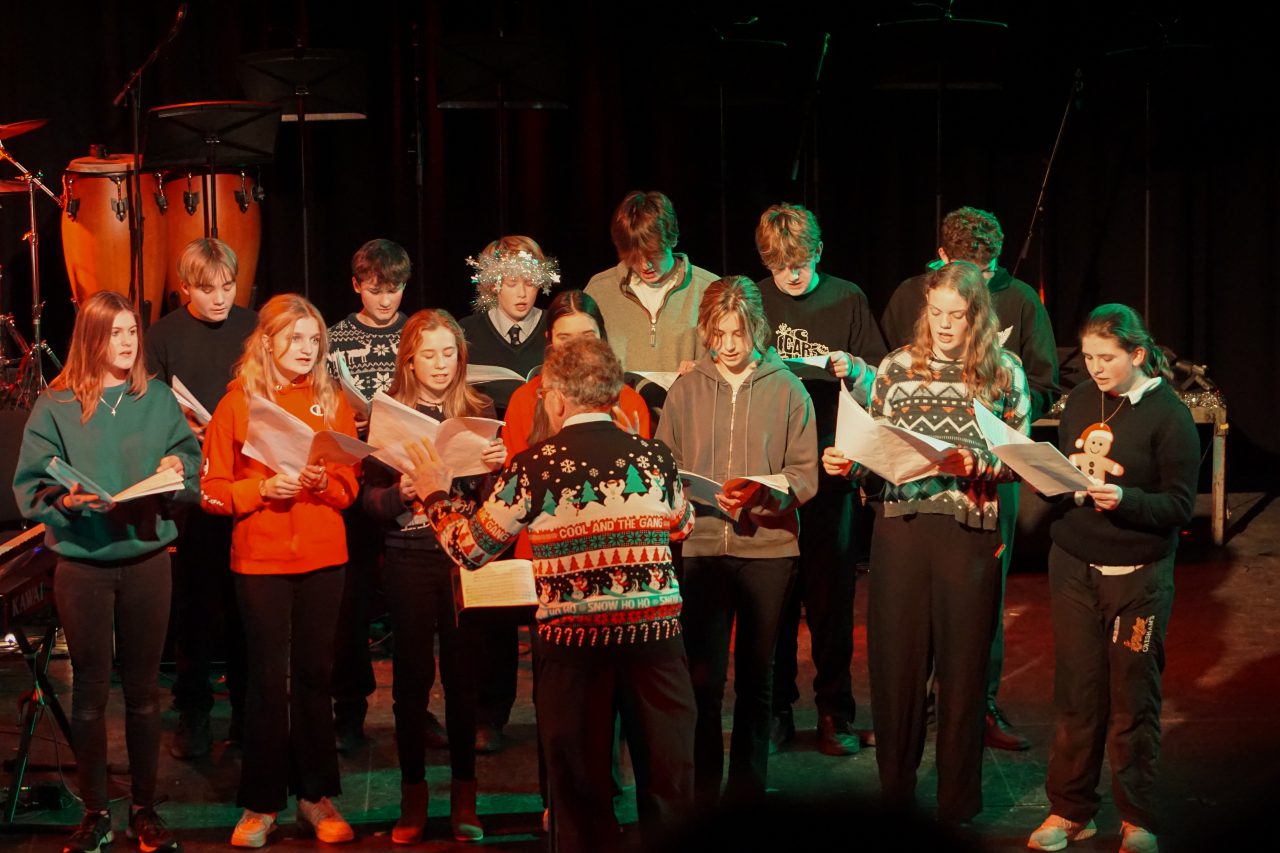 Fishmongers’ Hall December 2021
Schola Cantorum was delighted to be able to return to Fishmongers’ Hall in December to firstly sing at the annual Dinner and a few days later at the Carol Service. The dinner is an occasion which allows the choir to put on evening wear and sing carols on the sweeping double staircase at Fishmongers’ Hall as guests arrive. Later, they entertain while the first course is cleared. This year’s offering was The Twelve Days of Christmas, a 9 minute romp through the traditional carol in an inspired and entertaining arrangement by Bob Chilcott. An addition this year was to be filmed by Fishmongers’ as part of a digital Christmas message.
The Carol Service takes place in St Magnus The Martyr Church, The Fishmongers’ Church in London. The Choir, led by Head of Chapel Music Mark Jones, sang a mix of anthems including O Holy Night and O Tannenbaum. and lead the singing in the congretational carols. 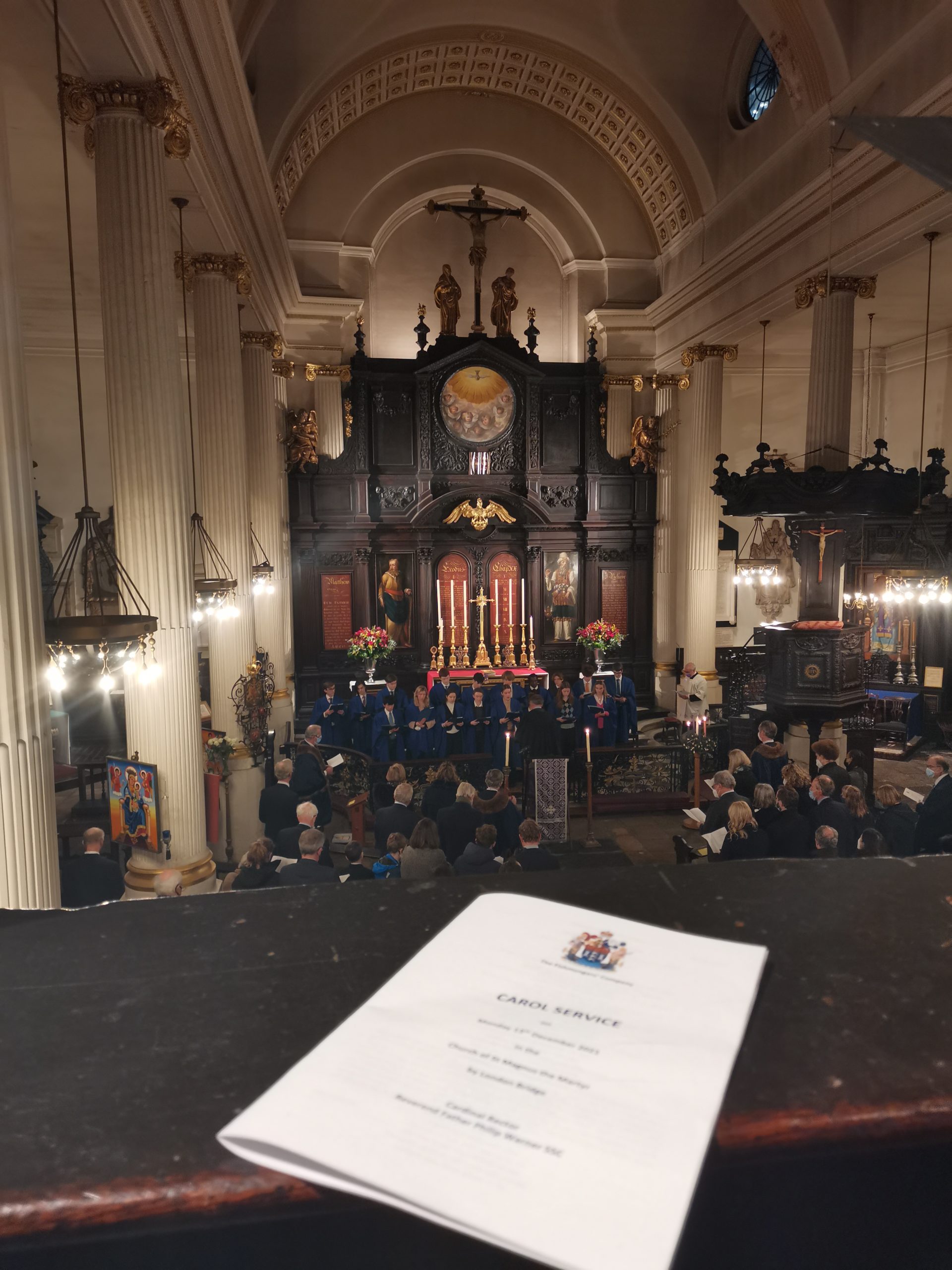 Messiah
The joy for those that sing is to come together and perform. Messiah on Sunday 12th December was one of those occasions when the school welcomed back the public, OGs, staff and pupils to dust off their copies of Messiah and after a ‘top and tail’ rehearsal, perform this uplifting work. Some of our most talented pupils sang the challenging solos and performed alongside local professional musicians and staff in the orchestra. Special mention must be made of our soloists as the difficulty of these solos cannot be underestimated. Bravo to Oliver B, Louis H C, Raphael C, Johnny D, Beatrice G, Tavi P, Julius R, Ruby S, Jimmy T, Joseph O and Kate W. Mention must be made also to Naomi H-S playing oboe and Elyzia W playing timpani. A wonderful sound from the ‘scratch’ chorus completed the picture and for the audience, provided an evening of quality singing and performance. Thanks to FOGs for running the popular bar and the retiring collection raised £250 for the School charity, the Holt Youth Project.
Anyone wishing to join the Lent Term Choral Society to sing Mozart’s Requiem, should contact Fiona Ross [email protected]’s.com. Registration is on 13th January at 7.30pm. 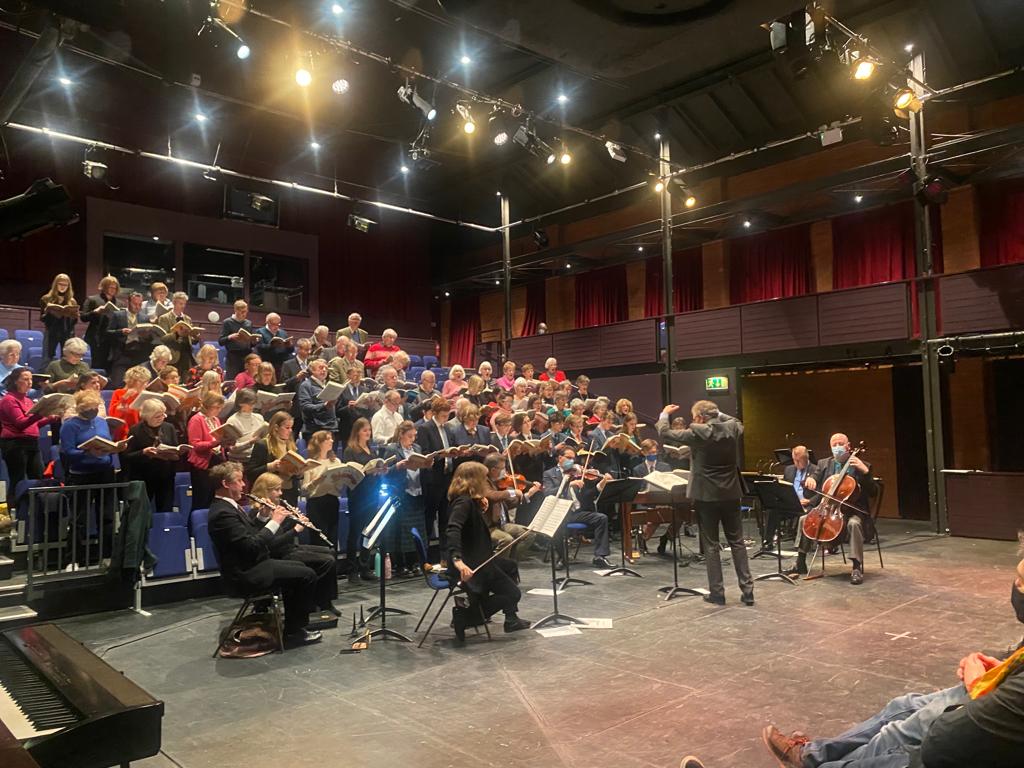