For more than half a century, Gresham’s School Rifle Club has maintained a top place among shooting clubs and schools.

Few Great Britain Rifle teams travel overseas without at least one Old Greshamian in their ranks and a high percentage of our pupils are selected to represent their country at Under 19 and Under 25 level, many even before leaving school.

The successful history and tradition of Rifle Shooting at Gresham’s is partly down to the excellent facilities and equipment here at the school. On-site there is a fine 8-lane indoor small-bore range complex. It allows for .22 shooting at 25 yards in the prone position and also for air rifle shooting in the standing and prone positions at 10 meters using electric target changers. Our firearms and equipment are of the highest quality, with accurate, modern rifles of various types and sizes – including some for left-handers. We take part in some schools competitions, but primarily in adult events at county, country and international level.

Much of our open range shooting, using 7.62 mm full-bore rifles at distances from 300 to 1000 yards, is done at Bisley, Surrey. Here we have our own Club House (the “Pavilion”) where up to 30 pupils can be accommodated and catered for during the 40 or so days annually spent there. Once our newer members have proven themselves, they have the opportunity of being coached by some of the country’s top exponents of the sport – Commonwealth Games medallists and senior GB shots. Experience shows that, given determination from the pupil and the support of parents, we have a very good chance indeed of raising the young target shooter to National Team level.

One of the sport’s greatest attractions is that it is truly unisex. Many of our best exponents over the years have been girls and, to date, eleven of them have been Captains of Shooting.

As a 14 year old I had Alan Ponder and John Rowley visit my home encouraging me to pursue their respective sports. I chose shooting and my competitive rifle shooting began in 1985. In 1989 my International shooting opportunities began; I have now competed world wide, including success at 4 World Championships (3 gold, 1 silver) and 3 Commonwealth Games (Gold, Silver, 2 Bronze). It is, however, a success on home ground I am most proud of; I am one of only 5 marksmen (and women) to have won Her Majesties The Queen’s Prize 3 times in it’s 150 year history. It was the opportunity and foundation created at Gresham’s Rifle Club that set the path for my future, for which I will be forever grateful. 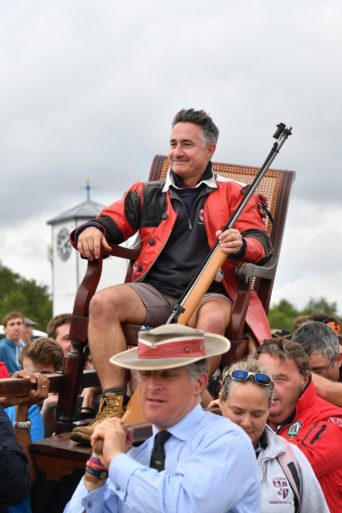