With a mixture of squad and social players participating in and out of allocated games’ times the school offers an increasingly rare opportunity for grass court tennis with the four ‘Chapel Courts’ being some of the best grass courts in the county.

With up to ten fixtures in the Summer term at First VI, Second VI and increasingly Third VI level there is an opportunity for all to compete against schools and local clubs both at doubles and singles.

The school has enjoyed great success over recent years especially at first six, and with experienced internal staff and three external coaches (three level 3 LTA and USPTR), the staff are well qualified to coach at all levels.

“I joined Tallis House on a sports scholarship in 2010.  Whilst I played all the sports until 2013 there is no doubt that Gresham’s inspired and supported me towards achieving my aim of a tennis scholarship in USA.

I spent four years at Northern Arizona University (Flagstaff) playing with and captaining a successful division first college team and also obtaining a degree in History. 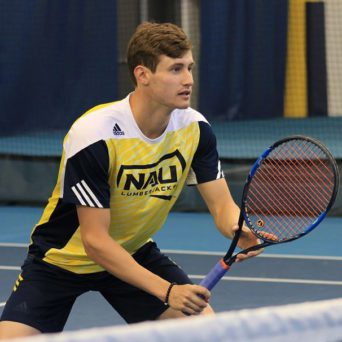