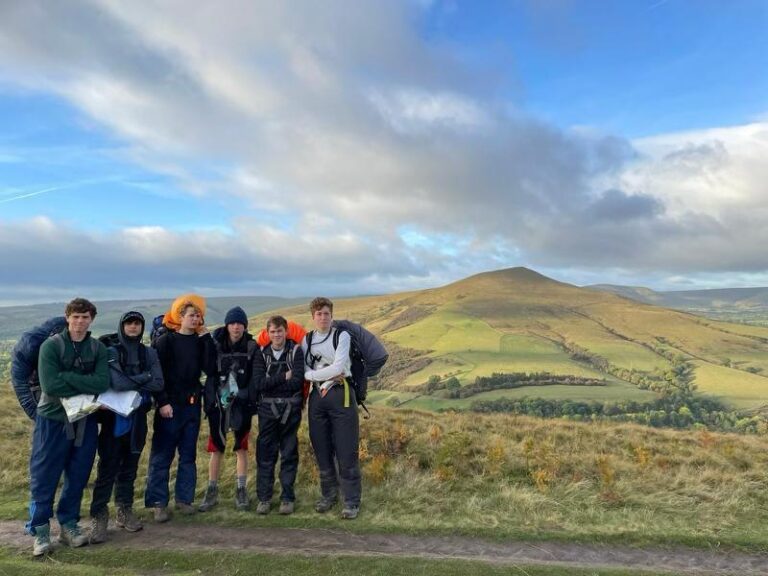 The CCF RAF section spent the first Field Day … in the field! The Year 10 and 12 cadets were ‘lifted’ in minibuses to the grounds of the Muckleburgh Military Collection where they deployed their orienteering, team work and research skills.  These activities produced some highlight moments.  One was watching the Year 10 cadets metaphorically ‘super glue’ their hands to a rope and work as a team to tie a knot between each cadet holding the rope.  Another was watching George M take command and rescue his fellow Year 12 cadets on a ‘desert island’ (aka. a circle of rope) with the tide encroaching.  The cadets also had the opportunity to visit the museum and see first-hand some of the incredible items in the military collection.  To encourage their engagement with the museum exhibits, the cadets were divided into teams and tasked with researching a quiz for an opposing team, who were then sent back into the museum to find the answers – under timed conditions.  The conclusion of the first day was that Year 12s can tie knots, the Year 10s can research quizzes!

The second Field Day was spent back on Gresham’s home soil. In the morning, Flying Officer Williams led drill and deportment exercises; he nobly tackled messy feet, sloppy arms, and lazy knees in preparation for the upcoming Remembrance Parade in November. In the afternoon, whilst the Year 13 cadets led a team in preparation for the national Air Squadron Trophy, the Year 11 cadets were in the swimming pool, simulating life raft rescues.

Well done to all those cadets who earned badges over the course of the two days; now get them sewn on to your brassards!

CCF Navy enjoyed some time afloat at Hickling, and had a great couple of days on the water!

180 students and a large number of staff were off-site so as to volunteer in the local community during the school Field days. The school has established close links with Holt Youth Project, Thornage Hall, the Treehouse Community Café, St Andrew’s church in Holt, Glaven Care, Lloyd Court, Age Concern in Sheringham and local conservation sites such as Holt Lowes. Gresham’s students had the opportunity to experience first-hand some of these amazing social enterprises and charities which bring people together across the community. A proportion of the volunteering work was outdoors: clearing and mowing, pollarding willows, picking apples for winter storage, creating raised beds for vegetable and salad growing and habitat management by cutting back invasive species such as gorse. These initiatives were spread across at least six different sites and included a certain level of expertise. Field day also allowed for a number of pupils to complete their Silver DofE expedition in the Peak District.

At Holt Youth project the principal aim was to help clear storage areas and the allotment. The project is now operating a clothes bank and there was a huge pile of donations to sort through and get ready for display in their new shop. There were also visits to Glaven Care and Age Concern in Sheringham. Students chatted and played board games and Bingo with the elderly. It makes a positive difference to people’s lives to come into contact with young people and to share experiences and stories. A group based in school worked together to create Art kits for young people at the Holt Youth project. Each kit was tailormade and carefully designed so as offer a high quality resource for those who might not have much opportunity to make art.

It was a brilliant two days of volunteering and we were lucky with the good weather and sunshine.