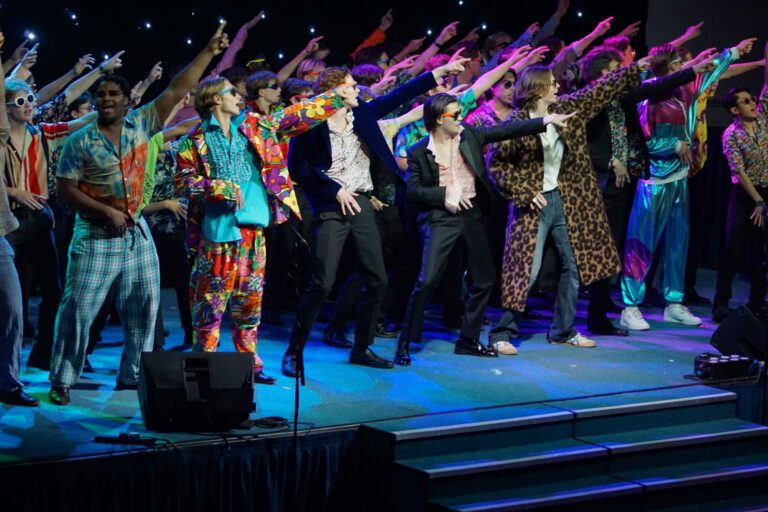 Friday 14 October was the date in the diary this term for that most fiercely contested of competitions – House Music 2022.  For any new pupils who had witnessed the build-up and may have been wondering exactly what the fuss was all about, all was about to be revealed.
Mezzo-Soprano Laura Wright, no stranger to performing at high profile events such as International sports events, and performing for Royalty was in the hot seat as Judge.

Instrumental showcased an eclectic mix of pieces and musical skills to an already packed Sports Hall.  Tallis, with their rendition of Stevie Wonder’s I Wish, were crowned winners but the overall scores not read out. The overall winner would not be revealed until the end of the evening. After a quick tea break, it was back in the Hall for Part Song.  More audience had arrived and once again the Houses went head to head with a variety of songs to best show off their singers. It was the turn of one of the girls’ Houses to claim victory and Oakeley were delighted to win with Kate Bush’s Running up that Hill.  As with Instrumental Laura gave a summing up.

Parents headed off to Big School to enjoy refreshments and the pupils headed back to House for refuelling and last minute unison rehearsals and to change into their costumes. With hardly an empty seat in the Hall, Oakeley took their place on stage to start the Unison element of the competition. It was apt they sang The Greatest Show – the day was certainly producing some spectacular performances. Farfield concluded the Unison performances and all eyes turned to Laura on stage for her feedback and final summing up of the competition.

After what seemed an age, the waiting was over and Mrs Wolfe returned to the stage with Laura to award the cups. Tallis and Oakeley proudly received their cups and Farfield were victorious in Unison with Get Down on it/You should be Dancing. And the overall winner was… Oakeley!

Our thanks must go to Laura for judging, to the Ground and Technical staff for creating a Concert Hall out of a Sports Hall, to the Music Department and House Staff for helping where necessary, but bravo to the pupils, who once again, showed that music runs through the very veins of Gresham’s.