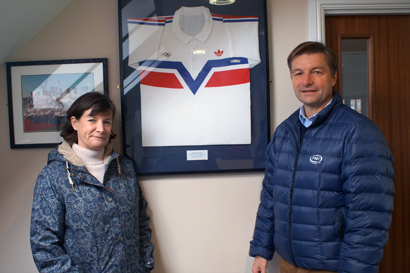 Richard was a member of the Gold Medal winning Great Britain squad in the 1988 Seoul Olympic Games. Four years earlier he won Bronze at the 1984 Olympic Games in Los Angeles. He also won silver with the England squad at the 1986 Hockey World Cup in London   Richard became the President of Great Britain Hockey in 2007, a post he still holds.

Richard, who was accompanied by his wife, talked of his “fond memories of the school” as he visited Gresham’s sports pavilion where one of his hockey shirts from the Seoul Olympics is proudly displayed. He also visited one of the School’s hockey pitches which was named after him in 1994.