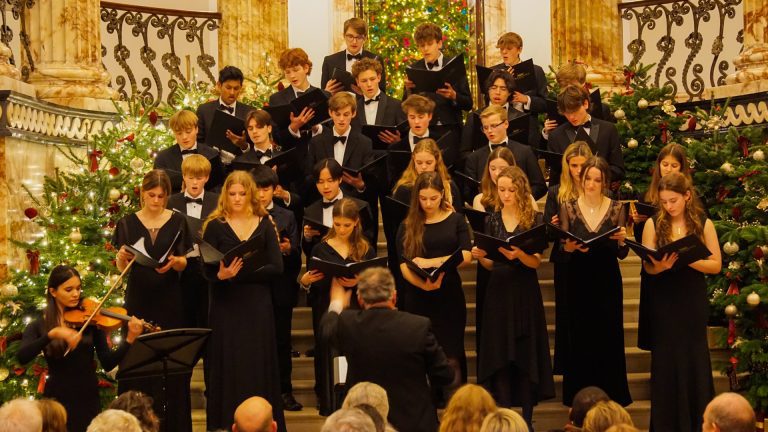 The Music Department was delighted to take part in a fundraising evening on Thursday 1st December, to launch the Christmas Candlelight Tours around Holkham Hall. Planning began several weeks ago, to provide music for some of the beautifully decorated state rooms as well as programming a special concert in the Marble Hall. Musicians from Alderman Peel High School in Wells joined our musicians, with singers and instrumentalists playing in the Saloon and the Marble Hall during the tours before they too took part in the main concert.

The concert in the Marble Hall was programmed as two distinctive halves. Given the standard of our singers, the department was able to stage an abridged version of Schubert’s ‘Winterreise’ (Winter journey). This song cycle is a challenge for a professional singer and it was a proud moment to watch Ruby S, Johnny D, Tamsin S and Julius R not just perform, but really master with such aplomb this piece. Schola joined them in the first half and Elgar’s ‘The Snow’, with violin accompaniment from Ilana B and Isadora A was a stand out moment.

After interval drinks in the Saloon, Brass Ensemble opened a lighter second half. ‘White Christmas’, ‘Jingle Bells’ and ‘All I want for Christmas is You’ got everyone’s feet tapping, with some excellent jingle bell action from a certain trumpeter! Two Ukrainian pupils from APHS treated the audience to an emotional first verse of ‘Carol of the Bells’ sung in Ukranian, and Gresham’s Strings players joined in accompanying the APHS choir in Gjeilo’s ‘The Rose’. Further Christmas pieces from Schola concluded with Chilcott’s ‘The Twelve Days of Christmas’, a version with many unexpected twists and turns and surprises, which is always a refreshing change from the well-known traditional version!

The audience showed their appreciation with extended applause and the proceeds of the evening will greatly help the two benefactors, St Withburga’s Church and Gresham’s charity, the Holt Youth Project.

This event is always a favourite with our wider community and for those that know Handel’s work well, a chance to dust down a loved-score and come along on the day and sing an abridged version of this great work. For our pupils, it provides the experience of getting to grips with some beautiful arias and performing with an orchestra – a mix of peripatetic staff, invited professionals and our own instrumentalists. This year was no exception and although it was a very cold and frosty night, those who braved the wintery temperatures were treated to a rousing performance of Messiah, with notable solo performances. The School Chaplain, Rev Branford ran a wonderful bar in the interval, offering the chance to have a glass of something festive whilst raising money for the School Charity, The Holt Youth Project.

Our Choral Society next term is a chance to sing Mendelssohn’s ‘Elijah‘. Rehearsals commence on Thursday 12th January. Contact Fiona Ross [email protected] for further information and to be added to our mailing list to hear about future events.

The end of the Michaelmas Term is a busy one for all choir members, and for Schola Cantorum it means two visits to Fishmongers’ Hall in London to sing at the Livery Dinner. Our Heads of School attend this formal dinner which takes place in the Banqueting Hall, and the choir sing on the very impressive double staircase whilst guests arrive and later entertain during courses. The Carol Service in St Magnus the Martyr Church a few days later, is a chance to see the Fishmongers in their finery and enjoy another trip to London.

All of Gresham’s flagship ensembles have shared Christmas music with the school. On Monday, Concert Band performed a foot-tapping rendition of ‘Feliz Navidad’ alongside the Christmas hits ‘Sleigh Ride’ and ‘Fairytale of New York’ to an appreciative audience in the Chapel.

During Chapel last week, pupils were treated to a preview of the latest Gresham’s Girls single. This was followed by String Ensemble playing ‘Let It Snow’ and ‘It’s beginning to look a lot like Christmas’ and Brass Ensemble performing ‘Carol Fantasy’. The Chapel concluded with Gresham’s Guys 2022.

It’s not just pupils who have been sharing the Christmas cheer – the staff choir have also been rehearsing for a performance this term.

This has been a wonderful way for Gresham’s musicians to showcase all their hard work in ensemble rehearsals this term, and a great way to spread Christmas cheer through the School!