Our Rifle Club excelled at the British Schools Winter Open 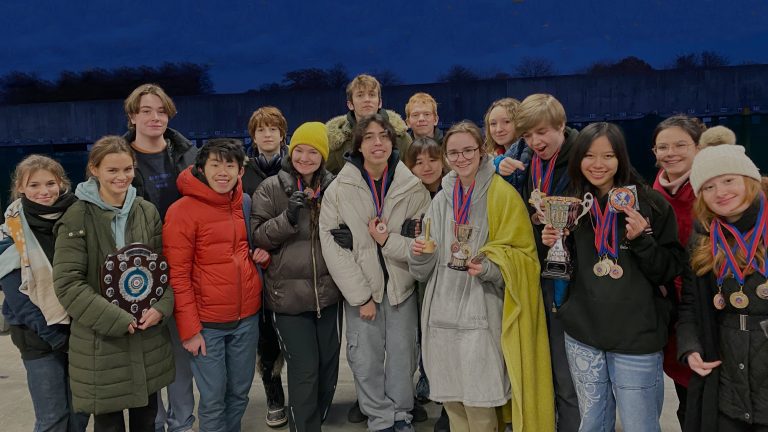 On the last Saturday of Michaelmas Term, the Rifle Club travelled to Bisley for the annual British Schools Winter Open. We took two good teams, one of which had a large amount of experience and ability, the other which was made up of several young, newer members of the Rifle Club looking to gain some valuable experience. Our ‘A’ team went to the match extremely confident and certainly had the ability to win. Numbers were slightly down this year, with 148 competitors at the competition, from 13 different schools around the country, and the majority of the ‘big’ shooting schools were represented. Each Individual had to shoot four times, to give a total out of 400. The good number of newer shots that we took to the competition all shot very well but it was Ilana B and Alma DR who both shot way beyond their three months of experience and both finished in the top 100 in the Individual. It was the senior members of the team however, that really showed their talent. Belle W was 18th out of the 148, Georgie C was 11th, George B was 2nd and Georgina B won the British Schools Individual Championships with a superb score of 389 (x400). Georgina B and Belle W also won both the Junior and Senior Pairs for Gresham’s. Georgina B and Belle W, along with Hannah B and Georgie C narrowly (by just two points) missed out on winning the ‘Team of IV’ competition and then had to settle for third place in the ‘Team of VIII’ competition with team mates George B, Avis F, Xenia P and Alex S. Out of a possible 3,200 points the Gresham’s ‘A’ team finished just 10 points behind Wellington College, the competition winners.

Huge congratulations to all members of the Rifle Club but particularly to Georgina B on continuing her phenomenal form right now and possibly being the top small-bore shot in schools shooting at this moment in time.