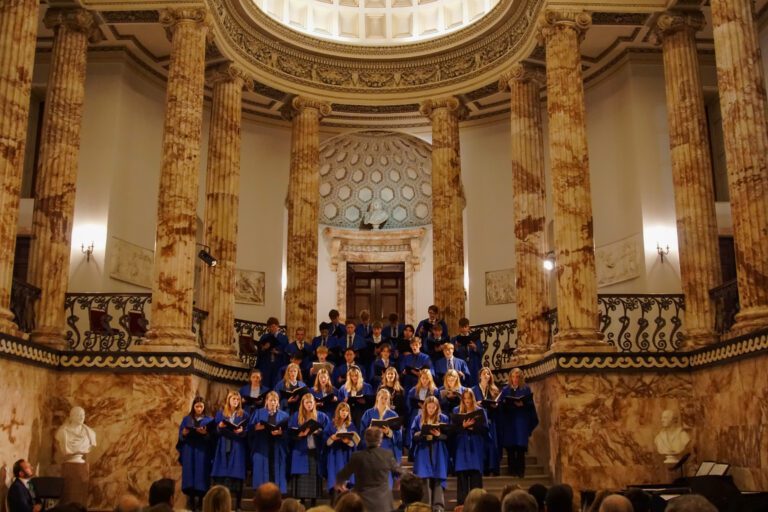 In a venue befitting the talent of our musicians, the stunning Marble Hall at Holkham Hall proved a magical setting for the Scholars and Choirs concert on Wednesday 21st September. Scholars from Years 9-13 took to the stately stage to perform a variety of instrumental and vocal solos, while Schola Cantorum, joined by pupils heading to Malta for a Half Term Choir tour, gave the large and appreciative audience a flavour of their a cappella programme.

The evening opened with the Choir circling the audience, making use of the upper balconies, to sing Mozart’s V’amo di core, a piece sung in canon, which was followed by pieces from Bruckner, Walton and a wonderful setting of Shenandoah by Erb. The first half continued with a duet from Ruby S, Year 12 (voice) and Isadora A Year 10 (violin), and solos from Isadora A, Rose T Year 10 (piano), Zinnia-Claire B Year 10 (cello), Julius R Year 13 (voice), William J Year 13 (trombone) and Freddie S Year 13 (trumpet). Brass Ensemble, consisting of William J, Levin R Year 13 (trombone), Freddie S, Freddie G Year 12 (trumpet), and George B Year 12 (cornet) gave a rousing rendition of Pastime with Good Company as part of their set under the direction of Prep School Director of Music Lynne Roberts playing French Horn.

An interval in the beautiful salon above the Marble Hall allowed the audience time to enjoy their surrounding further before returning to their seats for a series of solos and further pieces from the Choir. An encore of May the Lord Bless You and Keep You from Choir and final bows from the performers was met with rapturous applause, and concluded what was a memorable concert to start the new academic year. Soloists following the interval were Year 13s Tavi P (voice), Hannah B (piano), Johnny D (voice), Raphael C (voice) and Grace H (flute), Year 12 Jimmy T (voice) and Naomi H-S Year 10 (oboe).