Rugby is the School’s major game for boys in the Michaelmas term. All of the boys, whether they are experienced or inexperienced, have the chance to take part and represent the school – our intention is to meet the needs of all.

Gresham’s enjoys an enviable reputation on the rugby field. We regularly host both County and Regional Tournaments and have seven high quality pitches. The coaching is delivered by staff who are supplemented by external specialist coaches; we have had the pleasure of welcoming the likes of Brian Ashton the former England coach to the school for training sessions. We enjoy strong links with Leicester Tigers Rugby Club and they have hosted our boys on a number of week-long pre-season training camps.

Our list of Old Boys who have achieved international recognition is long and illustrious; from A.A.Mulligan, Captain of the British Lions in 1955 to the current England scrum half Ben Youngs and his brother Tom Youngs (British Lions 2013), they have all learnt the game at Gresham’s.

The school has recently developed and installed a fantastic new Performance Gym with newly appointed Strength and Conditioning Coaches giving the boys access to expert advice to develop their fitness, strength and agility.

Gresham’s has a strong but traditional fixture list, we are mainly based in East Anglia but recently have developed fixtures with the likes of Oakham, Stamford and Uppingham. We also take part in County and National competitions.

In the Lent Term, those boys without major Hockey commitments play Rugby Sevens. Gresham’s enters a wide range of tournaments including the National Schools Sevens at Rosslyn Park.

Gresham’s boys continue to be selected for representative rugby. They frequently achieve regional and international selection and are often involved with professional rugby clubs.

The school is rightly proud of its rugby tradition. The game is played with the right attitude and enjoyed by the boys.

Brothers Tom and Ben Youngs, Rugby Union players for England. Both play for Leicester Tigers, Ben as scrum-half and Tom as hooker. Although both have, at different times, played for England, they made their first joint appearance on 24th November 2012, as part of the line-up against South Africa at Twickenham. Talent for the sport runs in the family: the brothers’ father, Nick Youngs, played for both Leicester and England as scrum-half. 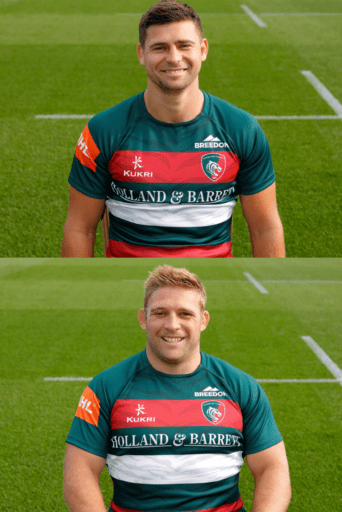