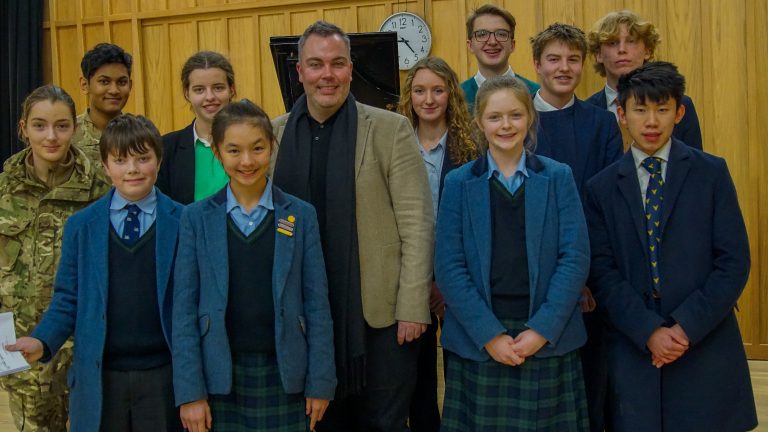 “Nicholas McCarthy is a concert pianist specialising in left-hand repertoire, and Gresham’s School created a brilliant opportunity for him to visit our school and showcase his musical ability as well as share his backstory. Across the two-day visit, there is not a shadow of a doubt that Nicholas gained the greatest respect of all the pupils and staff of Gresham’s School.

On Friday 13th January, a selected group of musicians at Gresham’s were treated to a masterclass by Mr McCarthy and then he demonstrated left-hand repertoire with a performance. Some lucky pianists were given a one-to-one session with Nick to improve their piece of choice and how to enhance the performing aspect of playing the piano.

On Saturday 14th, Nick McCarthy gave an inspirational talk during the School Chapel Service and also demonstrated left-hand piano-playing. His talk was on the topic of his life story and how, even though he was born with one hand only, he decided, after seeing a friend play the piano at school, that he too would like to not only play the piano but become a concert pianist. Initially, he did not even have a piano, although he did get a keyboard for the following Christmas; he taught himself to play, and used Radio 3 as his inspiration and teacher. One day, his father told Nick to turn the radio down, and in fact it was Nick playing! This was when he knew he was good and he subsequently applied for multiple music colleges across the UK. He made history when he became the first one-handed pianist to graduate from the prestigious Royal College of Music in London. Ultimately the main takeaway from the talk was: no matter how many people put you down or discourage you, no matter what the obstacles standing in your way, nothing is impossible and no matter how crazy your dreams may be, you’ll be able to achieve them if you put the effort in.”