A great season for Elliott with NCFC 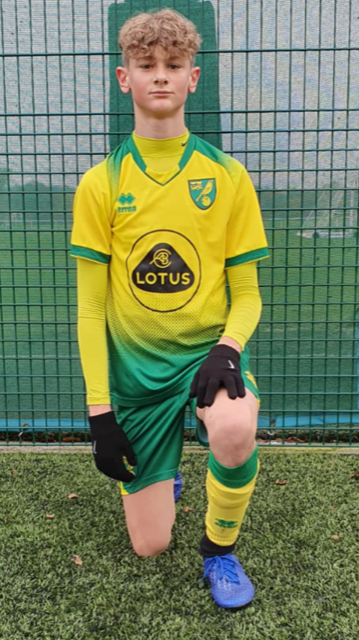 We’d like to congratulate Year 9 pupil Elliott, who has had some great successes with Norwich City Football Club Under 14s Academy recently.

Elliott trains with the academy twice per week, and is captain of the Under 14s in their league and cup matches. He is very highly thought of by the club and has recently been promoted to the under 15s, with a game against Watford at the beginning of December. Highlights for Elliott and the team include winning against Tottenham U14s 3 – 1 and drawing with Chelsea 4 – 4 in the Youth Cup (Albert Phelan Cup).

On Saturday 7th December, Elliot played a brilliant cup game against West Ham, considered a local derby. They won 5 – 1 with Elliott being named Man of the Match!

Alongside this, Elliot has also played for the U14A rugby team this term as a full-back and has been fantastic. He has used his football skills well and kicked 7/7 conversions from all areas in a recent game!