Alan Ponder kindly hosted what we believe was his 30th cricket dinner on Friday 24th January in Dave’s Diner. Alan started these Dinners in 1983 and they have continued annually although there was a brief gap after he retired as Head of Cricket in 2006. We have some very famous cricket alumni as guest speaker’s over the years including; Sir Garfield Sobers, Frank Hayes, David Steele, Younis Ahmed, Matthew Fleming and Ray East. The evening is always a very entertaining affair and this year attracted 48 guests including; three Headmaster’s (Douglas Robb, Nigel Flower & John Arkel), former colleagues, current staff, OGs, parents past and present, as well as some Norfolk cricket enthusiasts.

Steve Adams ‘opened up the batting’ with a short summary of school cricket highlights last season and hopes for the forthcoming 2020 season. One of the highlights was to acknowledge that 34 pupils this season have been selected for the Norfolk Youth Age-Groups (Boys & Girls) and this is an incredible achievement, which demonstrates the cricket programme is going from strength to strength under the coaching eye of Director of Cricket, Chris Brown. Alan then regaled the audience with some dubious facts and figures about some of the guests which proved to be highly amusing and in some cases accurate! Alan had asked Richard Jefferson (played first-class cricket for Surrey CCC) to speak briefly regarding a passion of his, and he highlighted the re-launch of the charity “The Friends of Norfolk Youth Cricket” which he initiated a number of years back when he was heavily involved in Norfolk Youth coaching. He told the audience that this charity had received a fantastically generous donation from Maurice Sills who was long-time supporter of Norfolk Cricket, and hopes this will help provide a fantastic foundation for this excellent local cause.

Our Guest Speaker this year was Will Jefferson, formally a professional cricketer for Essex, Nottinghamshire and Leicestershire CCC before retiring in 2012. Will can proudly claim to be the tallest professional player on the county circuit, at 6ft 10” and he entertained us with tales and insights into his career as well as some of the superstar cricketers he had the pleasure to play with or against. It was a highly enjoyable and informative speech and a fitting end to cricket dinners in Dave’s Diner, as this will be demolished at Easter in preparation for the work to start on The Dyson Building. 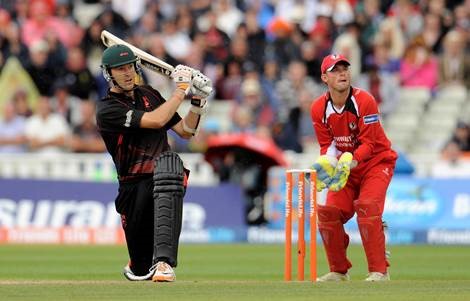 Will Jefferson in fine T20 mode for Leicestershire in Finals Day at Edgbaston.